Albert Frey, 1903-1998, was a Swiss-born architect who lived and worked mostly in California, where he had a long career designing modernist houses and various commercial developments. He started out as a young man in Paris in 1928 on a kind of internship in the office of Le Corbusier and Pierre Jeanneret, a period he regarded as highly significant to the development of his own architectural practice. He worked on parts of the design for the Villa Savoy and other projects, but didn’t stay long and soon applied for an American visa. By 1930 he was in the New York office of A. Lawrence Kocher, and together they designed Frey’s first major work, Aluminaire (1930-31), originally sited in Syosset, Long Island, a prefabricated and idealistic structure of the first order, with influences from the Villa Savoy project, but also recognised at the time as having some true originality of concept. It established Frey’s reputation as an innovator, but a serious career supported by architectural commissions had to wait until 1934 and the design, again with Kosher, of the Kosher-Samson Building in Palm Springs. In between those two projects was the extraordinary and beautiful Kosher Canvas Weekend House, of which more later. By 1940 Frey was designing his own house in Palm Springs, Frey House I, in a semi-desert environment, where the integration of the spectacular Californian landscape with the paired-down structures of modernism became perhaps the most significant characteristic of his work, as exemplified by Frey House II.

I became interested in Frey by accident when in the late nineties I picked up a second-hand book of his architecture, a slender minimal volume bound in pale pink that had great pictures and few words, and a rather compelling poetic aesthetic: (https://www.amazon.co.uk/Albert-Frey-Houses-1-2/dp/1568981902). At the time I was into all sorts of modern architecture, engaged with the design and build of my own rooftop project. And although Glenn Murcutt’s zinc-louvered long-houses of the Australian outback came to be the defining influence on my little project, Frey’s work kept its resonating attractions, not just because of my architectural interests, but also because of where I’d come from as a sculptor, how in my early days at art school I had become excited by the means to shape new materials into extemporised spatial forms with fresh imaginings, free from the last post-war knockings of dated academic subject-matter. Unlike sculpture, architecture has a long and viable history of making the creation of inventive spatial structures central to its discipline. Sculpture had until the sixties very little that was noteworthy in relation to that freedom. Though I came to his work late, I saw a personal link with Frey in this liberty and the close connection between new ideas and new materials.

Frey’s Aluminaire building began as a project for experimenting with and showcasing new mass-produced building products, and an early model of the design was carted around suppliers and manufacturers to drum up support and sponsorship of construction supplies, such as the five-inch diameter aluminium pipe columns that supported the whole structure of the two elevated levels, which were, though derived from Le Corbusier’s piloti, the first of their kind in America. The whole thing, as the name implies, was sheathed in aluminium sheeting.

View of the terrace at “Aluminaire”.

So who can resist the geometric perfection of this precisely-composed image of the Aluminaire roof terrace, where the calibrated light and shade look like something straight from the black and white chronicles of a László Moholy-Nagy constructivist photo? If there is already a strong hint of the esoteric aesthetics of impractical indulgence, then so what? Whilst it lasted it was so bloody handsome. And there’s more to come.

But Aluminaire was only rather briefly used as a dwelling, and had its practical problems, as was the way of much early modernism. It fell subject at the last to a harrowing and peripatetic history, ending up as a carefully catalogued set of parts in a museum storeroom.

Frey’s second project fared a little better. The simple and sublime Kocher Canvas Weekend House survived as a much-used and loved retreat until 1950, before being demolished.

The whole house was covered in marine canvas, with the intention of proving cotton as a viable low-cost construction material. It was built on a coastal site on Long Island, and had three levels. The lower level was open, with all the living quarters on the middle floor, and a roof terrace of the top, accessed by a spiral stair. A photo of the living quarters shows the inspirational open aspect of the high windows, looking like something straight out of a light- (and colour) filled Matisse studio. What a life!

By 1940, Frey was living that life. His own personal project, Frey House 1, was seen by many as an aberration when it was first erected in Palm Springs, but Frey wrote ecstatically about taking up residence  there: “I am thrilled every day by the varying spectacle of the natural views that are part of it, changing with light and colour, wind, rain, stillness, and sunshine. I believe, however, that a full understanding of this type of house will come only gradually because most people’s reflexes are conditioned by the conventional, closed-in houses in which they have grown up.”

Albert Frey on the terrace of “Frey House I”

Lovely! Thanks very much, I’ll have the natural dry garden, and the beautiful car in the beautiful car port too! In 1953 Frey remodelled the house with a circular second story, a pool, and a very different expressive aspect that gets into something very unlike the pure Miesian structure of the original – but still I love it. How about these expressive and shapely trusses round the pool, topped with plastic sheets? 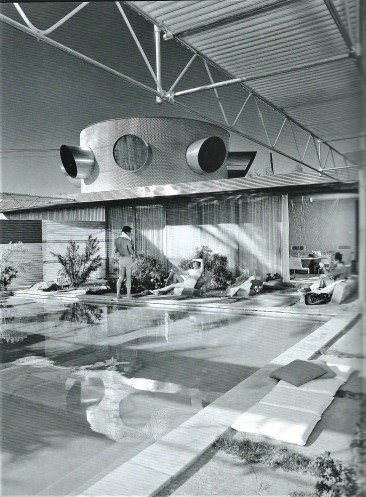 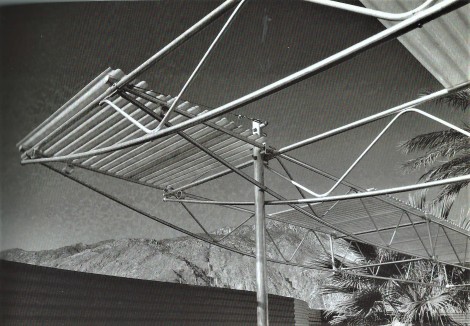 So here we are, we have arrived at transcendent architectural spatiality, made with modern materials of steel, aluminium and plastic, and we’re floating free! With the help of engineering structures of poetic design, and the essential additions of blue sky, blue pool, cacti, rocks and mountains, we enter a place of almost mythic inhibitions. This is the life, and no worries!

Some ten or fifteen years later, abstract art in England would take on a little of this delight and intoxication, in the forms and shapes and colours of, firstly, the sculptures of Anthony Caro, coming straight out of his own links to new architecture and the International Style – notably the Smithsons (Alison and Peter); then, hot on Caro’s heels, the New Generation artists. That’s where I come in, as a student in 1966, poring over the latest art mags with images of something new and very different from anything I’d seen before.

I love these sculptures by Tim Scott, the Bird in Arras series. They went further than even Caro did, perhaps even further than his Early One Morning and Prairie, in the activation of a free-flowing, open, colourful vision of constructed space very closely linked to aspects of new architecture (which Tim had studied). They triggered the complete involvement of the viewer’s own room-space. They have a clarity of vision and scale, allied to a straightforwardness of means, which make for very direct engagement, particularly if the viewer is clued up to the ways and means of modern life. If you get these works, you get them straight away. And like the Frey houses, if you like them, you like them straight away. I liked them, straight away. They make high art out of tubular metal and plastic sheet, and all looked to be going swimmingly at the pool-side. Space, light, scale, colour; what’s not to like?

I recall ogling dreamily the architectural models of houses by Mies van der Rohe and Le Corbusier some years ago (was it the Whitechapel or the Barbican? Have I conflated two shows?), thinking they were the most exquisite spatial objects ever made, superior even to all the new (or old, for that matter) sculpture that I knew of, with beautiful massing and even most beautiful detailing, opening into and out of deep and crafted architectural spaces of the first order. Here was clarity, here was spatial expression, here was the beauty of unfettered orthogonal forms in coordinated combinations – a dream indeed, until my more practically-minded companion asked: “But where’s the bloody kitchen?” As already mentioned, the practicalities of living with early modernist houses are notorious. Unless you want to live on take-away pizza and diet Coke, that was always the problem with the early Frey houses too. Check out the plans of the Kocher Canvas Weekend House and the kitchen appears to be a stunted affair jammed awkwardly behind the front door.

New sculpture didn’t have the same problem, but a different one. There is an analogy, though. Just as living on pizza with no kitchen is a bit unsustainable, even if charming for a while, and when added to Coke and booze is a recipe for obesity; so sculpture cannot live long and prosper on the pared-back diet of steel tube and flat plastic, even if nice colours are included. Even if the sculpture is a great hit for a short while, it doesn’t last as an experience in the round, or in time. Now we know – sculpture needs more aspects, more time, more complexity, more everything. It needs not only the ACTIVATION of space, that Caro and Scott in the seventies were adept at (and that architecture could always do so well); it needs too the ARTICULATION of material – moving and modelling and pulling and pushing, and so Tim Scott, along with a lot of other people, got into the forging of big lumps of three-dimensional steel in the eighties; and still in the end that wasn’t enough either, and in any case endangers the ACTIVATION of space that had just been won from architecture. Sculpture needs not just spatial activation, but the full, three-dimensional ARTICULATION of space. This articulation needs to be at close quarters, in proximity to the material, bound together with the articulation of the material… but don’t throw out the baby with the bathwater. Keep the excitement and freedom of the sixties, but add to it more stuff. Put all those three things together – the spatial activation, the material articulation, and the spatial articulation, and you have something very different from anything architecture can do, something completely intrinsic to sculpture that no other discipline can do, and something sculpture has never done before. And potentially compelling.

Keep things open, but invest in complexity. A varied diet, not too much of the same thing, not too much of anything, mostly vegetables, as they wisely say these days. Architecture and art have to adapt to embrace sustainability, have to become wise to the realities of a finite world after the heady intoxications of Aluminaire and Bird in Arras. But the spirit of those early modern works is fully worthwhile integrating into new and cleverer ways of making activation and articulation, physicality and spatiality, work together as intrinsic elements of a much more sustainable, long-lasting, fully nourishing artworld.

One of my own recent attempts to keep the baby and the bathwater and have it all in sculpture. “Babybath I” 2018, steel

(With thanks to Richard Ward for the idea of distinctions between “activated space” and “articulated space” in sculpture.)