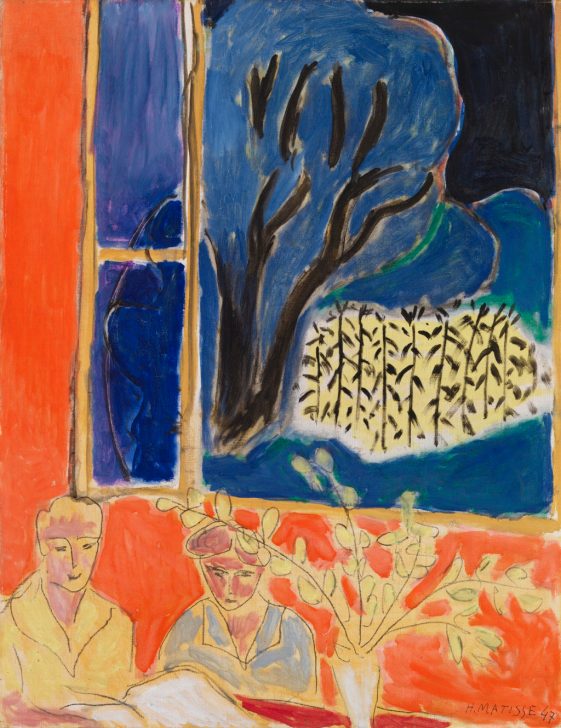 In my earlier article on Space in Painting and Sculpture, I wrote about a studio reflection on what I was trying to get out of colour, and I proposed that the space that can be achieved in a painting is related to the size of the work, but is not in any way compromised by it. A small painting which is good is as valid as a big painting which is good – the experience would be the ‘same’. In short, don’t go looking for pictorial illusions, but deal with the space you have available to you and maximise that. Let the space develop accordingly – illusions will occur with colour and do not need the added choreography behind them. I felt that the remark about the size of the painting could have been misconstrued as relating to a “quantifiable’ sort of space, when what I was trying to get at was the principle of bearing down on every moment in a work, making every bit of the painting equally significant. The problem painters have is that paint colour when united with its support will often lend itself to suggestions of landscape, buildings, objects or figures in ways that can often be beyond our control. This kind of suggestion was something discussed in a Brancaster forum on my own work – people commenting could see a torso in one of my paintings. To this day I cannot myself but I took the point that the colour was doing this and whether I intended it or not was irrelevant. It is a human trait to seek a logic in a pattern or configuration and many artists will play on this with evocative effects and an ambiguity of forms. My painting was probably not good enough and it “leaked” into suggestion or rather allowed itself to leak by not doing enough in itself, which is the same end. My conclusion was the same: I hadn’t worked the colour enough, which was quite frustrating with hindsight, as I worked for months on that damn thing.

When discussing space the word depth often pops up. Depth is a term that I feel needs greater interrogation when discussing painting. I cannot help but consider depth (in itself the most hackneyed term for illusion) to be created as a result of tone which promotes recession or form, which is surely figurative. Recessive colour spaces are due to conditions which emanate from figuration, landscape and aerial perspective – the violet blues forming the mountains or different sizes of forms indicating distance and so on. “Space” is a much better term when discussing colour in abstract painting, in my opinion. I have become convinced that space as a condition hinges upon movement. In painting, movement can be created through colour relationship – not ‘colouring’, which is passive, or “colours”, which connect with a designed painting, but the reactive quality of any given colour or colours to any other given colour or colours within an orchestrated whole and, ideally, without a hole. It is not in the brushed mark per se which is a sort of trapped movement, and it can equally well be in the ‘area’ as long as it generates some sort of energy, a pressure, a luminosity through its characteristics and relational qualities. Maybe depth is ‘captured’ because it is premeditated, space is released because it is discovered?

Abstract artists do not really know what exactly is happening when they are working (this needs a whole essay) – which causes a degree of irritation with some who keep trying to bring these probings in the dark back into some sort of contextual classification and fit everything into known prior achievements; it’s natural to want to compare but when the comparisons are shutting down the achievements of the work purely for an imposed contextual comfort blanket, the result is a lack of proper engagement and a closing-off of discussable possibilities. Art is not like that. It is much more of a wild animal. Depth can be controlled, space cannot. Movement is due to differences. “All lies in the contrast” as Cézanne said. Difference can come through so many factors, but it is conditioned ultimately in painting through colour. Facture will determine how we experience colour in a painting and facture creates detail – subtle shifts in paint quality create detail within differences of hue which in turn can maximise colour relationships. Concentrating on colour in this way can open up space. Subtle really does mean subtle too, it doesn’t have to be souped up or winged around, as it can also be clean, clear and precise. There is no hierarchy of technique or approach. The proof is always in the colour of the pudding. Adopting a reductive approach has been the driver of much so-called ‘advanced’ modernist painting, until post, post-painterliness or whatever post is past came along. The problem has always been the raison d’ȇtre – to condense or heighten are often used to describe and define such reductive methods. I’m not sure, with hindsight that this is completely true – with a few notable exceptions. I have prized the achievements of Morris Louis, for example, since a student, but not the “Veils”, nor the “Unfurleds”, as distinctive as the latter are (I always get a frisson of excitement when seeing one with its instant recognisability). The “Stripes” were the most significant works for me with their disinterested colours and great drawing.  Those days are gone, though, but I do not think a throwing out of the baby with the bath water is the solution, as artists who have worked in reductive ways do exemplify the importance of specificity. Matisse was a precursor of this for abstract artists with his continual modification and finishing ‘hit’. Now would be the time to maintain that specificity but to find more engaging, ambitious, non-reductive approaches that create greater freedoms for the viewer; freedoms that also re-engage with the plenitude of detail and space when we simply look at the physical world. Stronger work needs, in my opinion, a real sense of organising and sorting out the wheat from the chaff or removing superfluous incident and delivering confident decision making, not reducing but strengthening perhaps – letting go of control and “giving oneself to the gesture” (Picasso) are not enough for me. There has to be more wilfulness without restrictiveness, rather than chance, which is a conformism in disguise. The Matisse illustrated is stunning not just in its colour and drawing or its ability to generate pictorial luminosity; they haunt me for their connection with how we see, too.

When we look at the space in our physical field of vision, we can take it all in in one go, however complex it is. In this instantaneous moment, we perceive movement – not in an A to B linear way by following form to form, but as spatial differences evinced through colour changes which are determined through texture absorbed by our retinas simply by facing front. Far to near, we get it all and work it out (texture is detail – in painting, a perceived surface). How we create movement in an abstract painting determines the space and the quality of expressiveness – which can never be depended upon to reach a resolution just by “having a go”. For it should also be pointed out that (curators take note please) trying to make art will not actually guarantee that it comes calling. You would think that every artist written about at the moment is able to make exactly what they want with complete success – batting averages that make them the Don Bradmans of art. The last thing a curator wants is failed or compromised painting (yet the truth of the matter is closer to this reality than the endless streams of success that seems to be hogging the walls – maybe this is why such trivial things get so much space and column inches? This sort of ‘art’ never attempts anything meaningful, so it sidesteps being criticised for failing. Irony is cool, as we witness in the latest Britain’s Got Art show, which is connected by the thread of having a go.

There are enough serious artists who thankfully challenge this mindset, although they are swimming against the tide. Information has become the lingua franca of art and like most texts these days it is pushed upon us rather than being something we seek so we become ever more indifferent towards issues communicated ‘at’ us; this forces outlandish positioning to make narratives have a more pressing urgency or relevance, and experience which was once at the heart of our engagement with art is relegated to the sidelines. “Have you seen” is morphing into “have you heard about”. I think (maybe hope) this desire for the superficial may be part of a wider phenomenon, the flip side of the current heavy horrors of ugly nationalism and all its manifestations. Are we seeing an inverted form of terminal lucidity? That moment when someone with a neurological disorder (without making light of afflictions such as this at all!) suddenly has a surge of clarity which fools you into thinking they are going to pull through when shortly after they don’t. Are we witness to a sudden coalescing of – hijacked – art forms into a parade of poppy notoriety when if we are patient things will return to a state of grown up rationality, and frivolity will be seen for what it is. Could this be the case with all this folly and anger? It would be nice for frivolity to play a role on the margins rather than centre stage – it’s a broad church after all. Is it just a matter of time until we can discover a new space in which better things can be enjoyed?