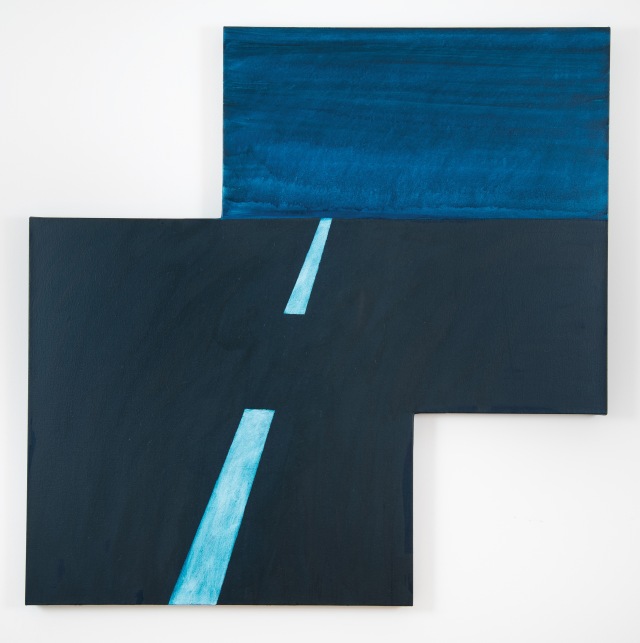 Mary Heilmann, ‘Looking at Pictures’ is at the Whitechapel Gallery 8 June – 21 August 2016

Among the paintings that conclude Mary Heilmann’s ‘Looking at Pictures’ at Whitechapel Gallery is ‘Maricopa Highway’ (2014). One of Heilmann’s most recent works, it is evocative of driving at night along scenic highways and the familiar narratives of road movies and video games. ‘Maricopa Highway’s’ nocturnal palette is uncharacteristically naturalistic and subdued, Heilmann’s vibrant choice of colour having been quickly established in her shift from ceramics and sculpture to painting in the early 1970s. In many ways this, like the other paintings of roads and oceans in the final section of the exhibition, feels like Heilmann making a definitive move into more overtly representational painting; diagonal stripes suggest perspective recession and more literally, road markings illuminated by a car’s headlights. The real Maricopa Highway is a little-travelled state highway in Southern California and the route taken by Heilmann’s parents as they drove from San Francisco to LA during her childhood. This describes well the way in which Heilmann makes paintings in which a personal narrative is alluded to through her choice of title, for example, ‘311 Castro Street’ (2001), which was her grandmother’s address, ‘Our Lady of the Flowers’ (1989), the title of a book by Jean Genet, of whom Heilmann says she is a fan. This personal connection to her own work is consistent through titles that denote significant memories, friendships, places and songs. Heilmann herself assumes a self-referential position in her 1999 memoir The All Night Movie, in which she wrote, ‘Each of my paintings can be seen as an autobiographical marker’. ‘Looking at Pictures’ makes much of Heilmann as an artist who paints her own life – the exhibition title itself is taken from a section of her aforementioned biography – but there is nothing pure or definitive about Heilmann’s approach to painting. Where she embraces abstraction as a referent for personal experience, she also denotes its more formal concerns, albeit with a casual and knowing imperfection. In ‘Maricopa Highway’ the duality of Heilmann’s methodology is well illustrated. She presents not just a scene of driving at night towards a distant vanishing point but a fractured reality of two different viewing positions placed consecutively. The diagonal lines are both road markings and a reduced abstract form composed on a shaped geometric canvas. Her application of paint is in part dense and almost flat, in part a translucent gestural wash. Throughout ‘Looking at Pictures’ Heilmann’s paintings reveal an adjacency of formalism and narrative, simultaneously telling stories of the proximity of herself to the work and also her objective distance while working towards an established language of abstract motifs.

END_OF_DOCUMENT_TOKEN_TO_BE_REPLACED 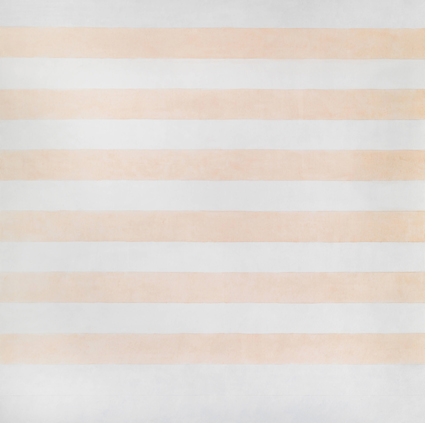 Agnes Martin said that inspiration found her and that she could take no credit for it, she just emptied her head – especially of thoughts of herself – and inspiration would come into her ‘vacant mind’. She maintained that her personality and experiences were irrelevant to her work, a belief that has commonly been reinforced by the few people allowed to witness her sitting for hours, waiting for inspiration to appear in the guise of a minute but fully formed mental image. Martin’s gallerist (and eventual friend) Arne Glimcher wrote, “…she was extremely self-effacing and separated her persona from her art. She believed that she was the locus where her art happened, rather than its creator.” Yet critics and curators seem less easily satisfied: who was the reclusive Agnes Martin, and from where did her ‘inspired’ paintings develop? Her lifestyle is often referenced as informing her aesthetic; a persistent endeavour to order and silence a fragile, troubled mind by producing immaculate, rational, quiet works. Tate Modern mercifully restrains from introducing Martin’s paintings as ‘products of personal and spiritual struggle’ caused by her schizophrenia until Room 5 of its current major retrospective, but nevertheless the exhibition at times develops into a distracting mashup of what we are told of the artist’s biography and what we can see for ourselves in her work, providing comfort and explanation in personal anecdote, and portraying Martin’s work as a logical story of cause and effect. Despite any of the vulnerability implied by the narratives surrounding her paintings, Agnes Martin at Tate Modern is a vast, comprehensive survey of her robust and relentless vision, best viewed by spending time with her paintings and not by dwelling for too long on the explanations of why they may have been made.

END_OF_DOCUMENT_TOKEN_TO_BE_REPLACED 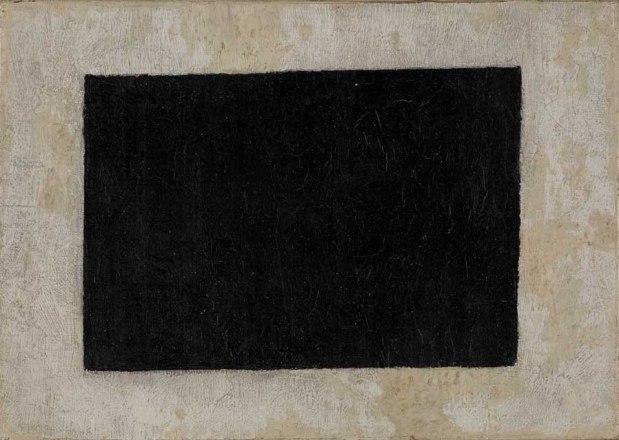 Adventures of the Black Square, Abstract Art and Society 1915–2015, at the Whitechapel Gallery, London

It was only a few months ago that Malevich’s monochromes were last in London, venerating his radical contribution to the end of pictorial painting and some proclaimed, to the end of art itself. Tate Modern’s Malevich, Revolutionary of Russian Art (16 July – 26 October 2014) was very much a historical survey; looking back at the long shadow Malevich’s Black Square – a headstone for representational painting – cast over the history of modern art. Adventures of the Black Square, Abstract Art and Society 1915–2015 at Whitechapel Gallery until 6 April clearly and alternatively positions the work’s reductive form (in this exhibition it is Malevich’s diminutive undated Black Quadrilateral that is featured) as the beginning of a new art starting in Russia and Northern Europe in the early twentieth century. The spread of geometric abstraction is then documented chronologically as it travels internationally throughout the next hundred years. Rather than Black Square being revered as merely a portrait of an idea, it is shown as the initiator of geometric works that connect with, reflect or challenge society. Adventures of the Black Square presents abstraction as not being estranged from social reality, that its concern with form, shape and colour throughout its history are intrinsically linked to politics and expressions of modern living.