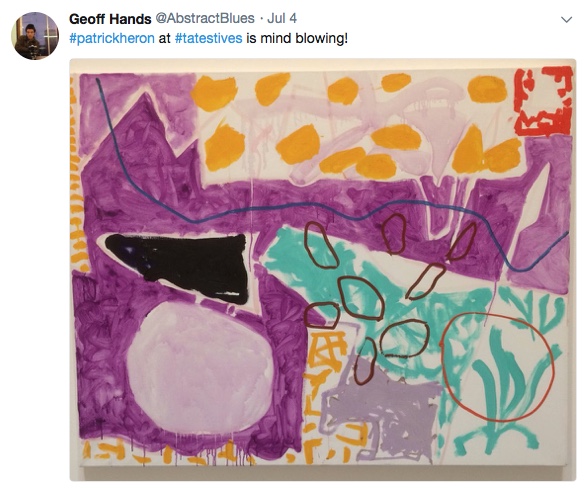 If you owned a few Herons how would you display them in your house? If you had over forty in your dream collection, and a mansion sized amount of wall space, you might mix things up a bit. In a retrospective at a major, award winning, art gallery the conventional approach would lead to a chronological hang. Not so for Patrick Heron at Tate St. Ives.

I was both enthralled and fascinated with the display and tweeted that the show was “mind blowing”. Intuitively, I attached ‘1-3 September: 1996’. The Tate exhibition guide who had showed a group of us around told me later that she had initially found the display “disorientating”, but her enthusiasm for the work was unaffected nonetheless. She was completely relaxed about it now. My own habit for exhibition viewing is to follow the order from start to finish and then to return to somewhere near the beginning and pick out the works that commanded my attention the most. On the return leg there is a certain degree of arbitrary stopping and starting as individual works that I initially passed too quickly make their presence known.

In this situation I was immediately thrown into a third form of viewing behaviour that was alien to me. The experience was not so much mind-blowing (social media loves hyperbole) as invigorating. For a moment I was a child in a sweet shop wanting everything, such was the temptation to taste, and visually touch, it all. ‘Square Green with Orange, Violet and Lemon: 1969’, selected from Heron’s wobbly-hard edge period, has the colour-flavour of Jelly Babies and a surface excitement and frisson that transforms the senses of texture as indivisible from the visual.

Heron’s work is often distinguished by its example of colour-shape dexterity and glorious visuality and a chronological display may not have accommodated or extended the potential impact of his achievements. The visual dynamism of the paintings, from all phases of Heron’s career, contextualised the display. All was equal, big or small, early, mid or late career. But it is mixed in a carefully curated way, as none of the sequencing looked arbitrary, but evincing a sense of purpose – if only to revitalise the viewing experience. There was a sense of freedom in allowing oneself to travel in any direction, including from one end of a wall to examine a row of works, or to diagonally cross a space under the magnetic pull of another canvas. 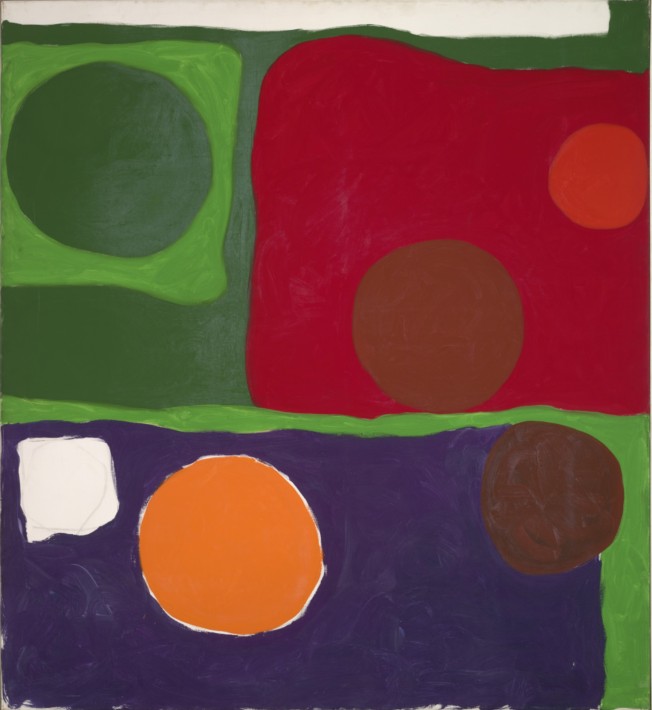 The one huge room, which is the new extension to Tate St. Ives, was sub-divided into four spaces entitled Unity of the Work; Explicit Scale; Edges and Asymmetry and Recomplication. But the wall texts within these sections could have been placed randomly. For example, ‘Five Discs: 1963’ has unified formality; the quantities and intensities of colour create a rhythm for the eye; the edges define the compositional unity as much as the placement of colour-shapes; and asymmetry is a hallmark of this and most of his work. These served to show that Heron’s practice was consistently founded on clear, analytical thinking and a delight in realising theory based on the visual history of painting and his own perceptions. 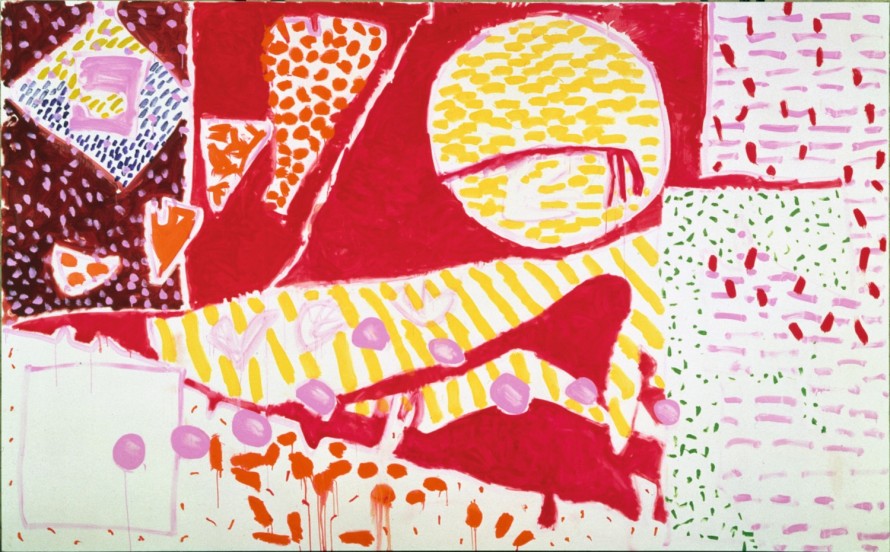 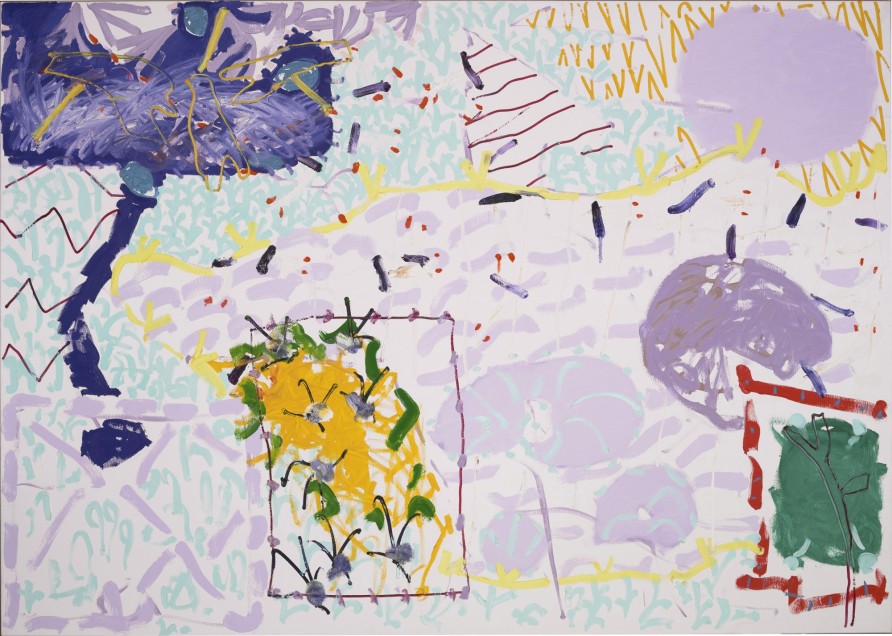 But an abstraction related to living and being-in-the-world was never overshadowed by theory or a purely art-for-art’s-sake formalism. ‘Red Garden Painting: June 3 – June 5 1985’ and ‘Sydney Garden painting: December 1989 II’ come from the final stages of Heron’s career. The confidence in distributing line, shape and colour (all inseparable elements for Heron) might look a little like child’s play. But no element looks out of place and the compositional balance enables the eye to move in, out, across and around. In the paintings from his Australian residency plant-like shapes, organic textures – even birds in a tree – have set up a conversation with colour, line and proximity of space inducing configurations. 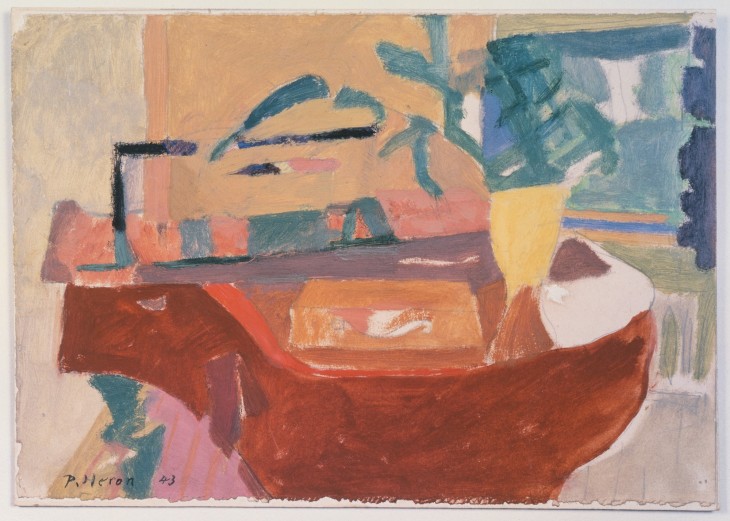 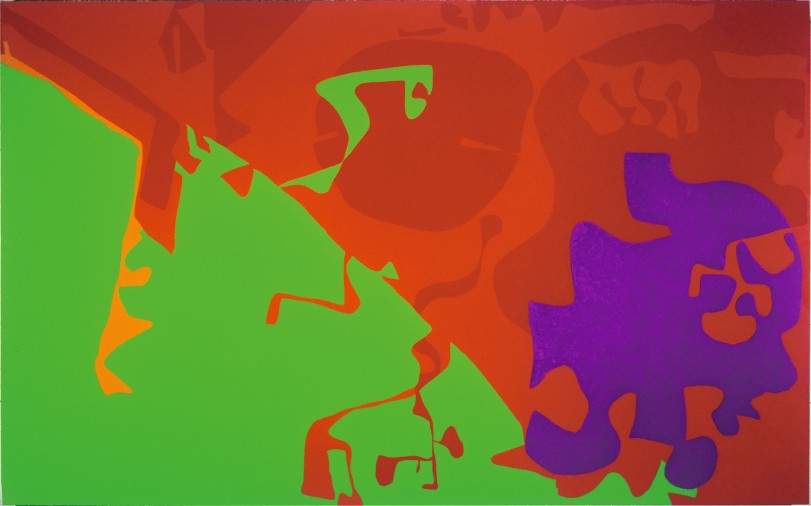 Yet for all the many acres of colour/paint on display ‘The Piano’ (1943), a diminutive 19 x 27.3cm oil on paper, holds court despite being placed opposite ‘Orange and Lemon with Small Violet: April – July 1977’ (198.1 x 274.3cm). The orange ocean of colour in the latter work could burn your brain to a cinder, but is controlled by the violet island that is embedded in the orange but borders the yellow that flowers below. ‘The Piano’ is a domestic painting in size and subject matter and is a precursor to Heron’s truly abstract paintings that were to develop from the 1950s onwards. Because of its size viewers were stepping up close to take it in. Interestingly, this close-quarters examination was just as likely for ‘Big Complex Diagonal with Emerald and Reds: March 1972-September 1974’ (208.3 x 335.3 cm) that also drew the viewer up close. Has a diagonal ever been so interesting? The twists and turns are as challenging and as surprising as the topographically defined network of roads at the far end of West Cornwall where Heron resided near Zennor.

‘The Piano’ is casual and relaxed. The painting appears to be a study in loosely applied interlocking areas of muted colours. It is harmonious and dreamy – but can you imagine this image 3 metres wide? I suspect it would hold up just fine. 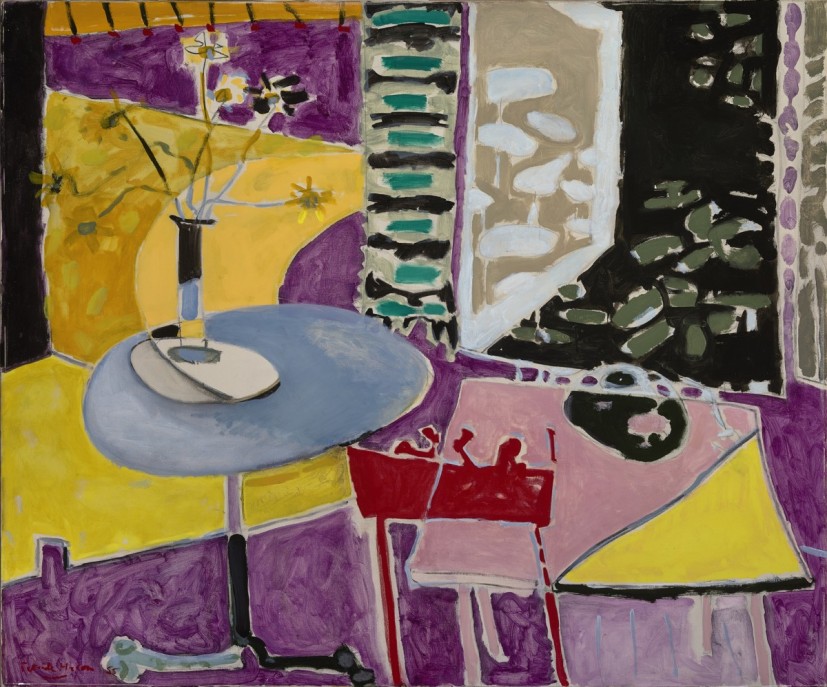 ‘Interior with Garden Window’ (1955) could thematically accompany ‘The Piano’ and bridges the journey from Heron’s healthy obsession with Braque, Bonnard and Matisse to his unique, abstract purifications for the eye that he makes in the next two decades. Here we see an open window motif in the top right hand quarter of the composition that seems to bring the outside world into (or onto) the picture surface, rather than taking the observer’s eye away into perspectival recession. Hanging down from the top centre there appears to be a wall hanging. By the end of the decade, ‘Green and Mauve Horizontals: January 1958’ shows us that the transference to pure abstraction has been achieved. Might we call this a proto-Speculative painting? The systematic process of applying varying strokes of paint are on an equal footing with the final result. An intuitive exploration of paint/colour application is in tune with making a visual statement that looks complete and fully realised – one more stripe might have destroyed its compositional harmony.

‘The Piano’ would conventionally have been placed at the start of the exhibition. It was not too far from the entrance, but was placed on the blind side of the first dividing screen. This possibly irrelevant fact is mentioned as the media has taken up an inferred sub-plot to the whole show. If you had read the press coverage beforehand, you could be feeling both a little wary but very excited by the prospect of seeing the exhibition. The media attention confirms Heron’s status as a major British painter as, without dissention, everyone loves the work.

But the curation is definitely not “bland” as claimed by Rachel Campbell-Johnston (The Times), or “so infuriating” as Rachel Cooke from The Guardian finds. Alastair Smart in the Mail Online claims that, “Against the odds, this Heron show just doesn’t take off.” Mark Hudson (The Telegraph), always a very thoughtful, perceptive and engaging commentator, strikes a balance of sorts when he says: “Don’t let me put you off seeing this original, if somewhat maddening exhibition. It takes guts to stage a show with no beginning, middle or end, which relies entirely on the visual curiosity of the viewer.”

Heron would surely have loved this last point as he applied orderliness in diversity, and asymmetry to the potential chaos of the inattentive fusion of eye and mind. He purified the experience of the eye by celebrating the peculiar but fundamental power of sight by making paintings for anyone to look at. The curators at Tate St. Ives, Andrew Wilson and Sara Matson (with some advice I would imagine from Heron’s daughters, Katherine and Susanna), have more than ”guts” – for their collective audacity is totally in tune with the spirit of the work.

Thankfully, Jackie Wullschlager from the Financial Times must have actually viewed the show with an open mind, as she wrote:

“Tate, wisely eschewing a chronological hang, has placed these generous, enveloping garden landscapes of dynamic rhythm and repetition, patterns of foliage and flower, in every gallery. Chaotic and expressive within their intermingled linear structures, they constitute a late style of mastery and experiment, exquisite design and broken space: the most sumptuous, vital works in a pleasurable, absorbing show.”

But do not take the implied, hedonistic, visual pleasure too much for granted, for on reflection I realise that I should have given ‘Vermilion and Ultramarine: June 11: 1985’ more time and attention. It feels too radical to take in at once, despite its minimalism. So we shall leave a photograph of this small canvas out of this article on purpose. If Cornwall is too far for you to travel, head for the Turner Contemporary in Margate between 19 October 2018 and 6 January 2019.