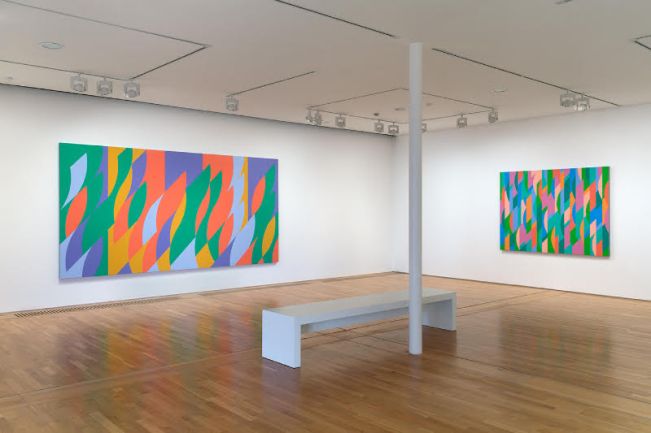 Even an English flâneur may have imagined being on the Côte d’Azur in this heat, pausing on the Promenade des Anglais, to admire the view. On an outstandingly bright summer morning, if you looked south from the De La Warr Pavilion in Bexhill on Sea towards France, the sea and brilliantly dazzling sky dissolved the field of vision, eschewing aerial perspective. Space had flattened; somehow, confirming the shifting nature of perception as optically realised and, therefore (or thereafter), re-conceptualised, re-seen, rather than diminished without the culturally acquired safety net of perspective.

Bridget Riley might be categorised as a ‘classic’ abstract/geometric painter, whose practice engages with image making that, autobiographically, encapsulates her perfectionist tendencies. Her methodological practice is invariably characterised by tightly controlled, sensuously schematic, repetitive and minimalist, optically demanding imagery. She’s a serial, visual, thriller – of the highest order. 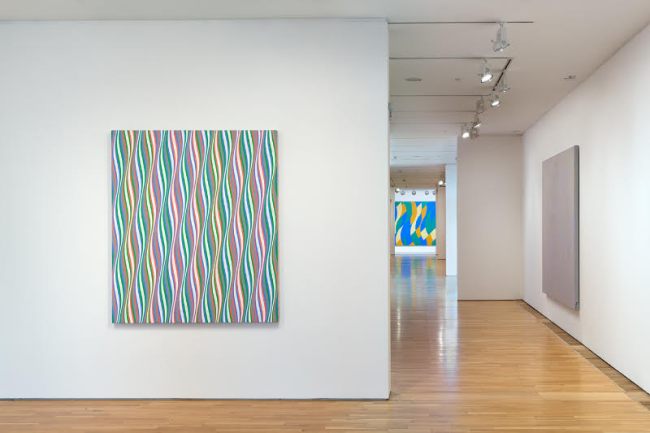 I am here today, as part of a small posse of writers from the press, to look at a selection of paintings and prints that explore Riley’s fascination with the curve. Petite and agile, Bridget Riley, one of the internationally most acknowledged British artists of the twentieth century, generously and energetically informs and entertains. In what approximated a subtle balletic performance, she is self-assuredly poised, both physically and intellectually, to address those present with great enthusiasm and vitality. Her explanations are as exacting and precise as her imagery and her confidence is assured.

My sense is that behind this apparent coolness, regularity and control in her work an engagement with the world as it is experienced (hence the opening paragraph), both visually and physically, continues to inform her whole oeuvre. Readers of Riley’s collected writings, cleverly titled ‘The Eyes Mind’, will be aware of her early visual and tactile childhood memories of the sea and sun. Confirming the particularly visual contingency of her paintings and prints, the non-perspectival experience of the sea front panorama referenced above was echoed and confirmed in Bridget Riley’s own words: “Pictorial space has to be about something on a two-dimensional surface, in which pictorial space happens by pictorial thinking… perspective is by no means the only way.”

A sense of the closeness of France was also fortuitous: “French and early Modernist art was clearly about perception… a connection with that line of looking.” Engaging with the works on display in this retrospective collection, and turning to scan her audience frequently, to explain the practical, formative training that her particular form of abstraction partly derives from, she referenced her traditional art school training in drawing from the figure: “Drawing can develop your insights – drawing is a tool that can open up the world.” But Riley also explains that the history of art (especially the painting tradition) creates influences, and visual language systems, as essential as the daily practice of planning, and making, work. From considering the spatial investigations of Cézanne and her journey to abstraction, via an interest in Cubism, she references Bonnard and Matisse to illustrate her defining interest in line and colour. Art historical knowledge, and a constant meditation on the rich history that informs her concepts and her entire output are consistently made clear, for there are many: “Respected and admired artists from the past and we can learn from them… according to [our] temperament.”

In explaining her burgeoning practice, as a young, aspiring artist in 1960s London, she says: “It was a sort of statement… I learnt to draw when I went to art school… I was taught to make figure drawings… I was very interested in colour… basic colour relationships… I would look at Matisse… How would Matisse be able to make that? From tonal painting, colour lightened and darkened… there had been an immense adventure in modern art… I went to work for J. Walter Thompson and in the lunch hour I went down to the ICA and Cork Street to listen to lectures by David Sylvester, Laurence Alloway and [Roland] Penrose…”

Her audience is captivated by now; she continued: “The development of modern art was halted by the two wars… I went to look at an exhibition of Futurists… (Visits to the Venice Biennale and Milan are mentioned too) … there were important and interesting things in it… abstract thinking… I carried on with making my own abstract work… instead of abstracting from things seen out there in reality… Bonnard and Matisse could do much more than Mondrian had done… I started from a line, what a line can do, a square, a circle… when I altered, changed or distorted something that was familiar to people… I found ways of making things active…”

Riley’s ability to clearly elucidate her practice as an abstract artist par excellence, and her measured use of a precise language, to objectively explain and describe the carefully selected examples from her Curve paintings, provided a simple exegesis of practice that absorbed the audience. That she believes that painting is still relevant was clear: “Painting is an incredible discipline and a great art form.” And again she emphasised tradition: “All my experiences [with the] figurative is a huge help in knowing what a painting needs if it’s to develop.”

Riley’s articulateness matched the refinement of her paintings. She drew the meaning out of the works, confirming the evidence presented to the viewer’s attentive mind. But her work is not purely cerebral, as the physical engagement and geometric coordination within her work is truly embodied: and not only in the eye. The sense of flow in the paintings echoes the movement of the human form and the environment that we occupy. Most especially, lines and angles of orientation are designed to evoke pictorial space: “Vertical had to bear the stripe… lead to the plane… the painting is very transitive… Verticals allowed one to have a rhythm, to contrast it with the curves.”

But, there was a period of 17 years of an insistence on the horizontal in her prints and paintings (1980-1997). This revelation had to be re-visited. Of the return to the curve she states, “the curve is more open to amazing changes than the straight line.” Again, Riley confirms her appreciation of the line, learnt from life drawing as a student, and that “The contrapposto is like frozen movement… The curve is so elastic and changeable.”

In discussing ‘Lagoon 2’ (1997) she admits that she was: “Trying to get the curve back”. And paradox is readily admitted: “Contour suggests a flat volume…” This elegant painting (quite large at approximately 1.5 X 2 metres, but absorbing visually, and not at all imposing) has the feel of a dense forest of colour-shapes, which is neo-Cubistic: Cézanne through Matisse’s eyes. Or, as Riley discloses, is based on the notion of her idea of looking at Matisse looking at Cézanne.

Superficially, Riley’s own personality, and temperament, as a painter appears less sensual than Matisse. But a flattened painterliness, where autobiographical marks are repressed, still allows colour and line to dominate with the joie de vivre we associate with the French master. The surface quality in Riley’s paintings is typically one of relentless smoothness, but colour sensation is still paramount.

In ‘Rêve’ (1999) contrasts and harmonies work with and against each other with a colour scheme of blue/green and cream/yellow. In ‘Painting with Verticals 3’ (2006) and ‘Rajasthan’ (2012) there is a pronounced sense of purposeful movement across the surface. In the latter, Riley describes the “march of the greens”, as this organic colour comes alive amongst orange, red, grey and white.

Bridget Riley’s abstract art is clearly modernist, but notwithstanding her traditional training as a painter (she still produces cartoons for her paintings), her work successfully combines a strongly characteristic feature of line through disegno (drawing) with form as colore (colour) to attain a synoptic temporality: intimating a psychogeographic relationship with space through physical positioning and perception; and a sense of time and rhythm integrated in and through the intrinsic properties of the images. The association of colour and line, especially the curve, is sensuous at a visual and an intellectual level. If this interpretation is correct, it might suggest that a purely non-objective abstraction is a fanciful notion – because contingency is unavoidable, so long as human beings continue to make art.