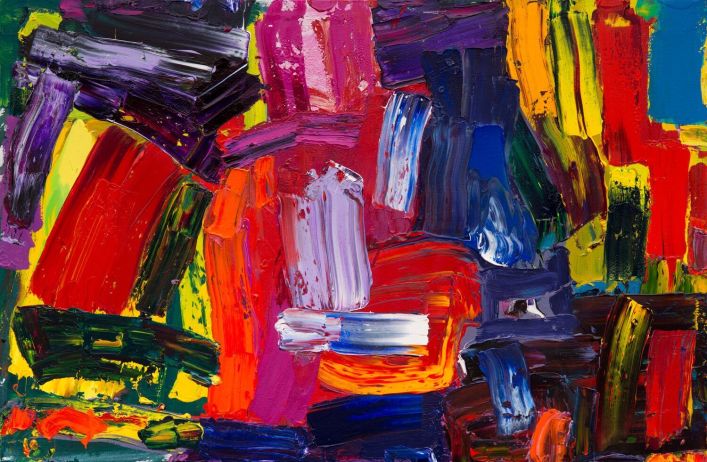 In the sludgy, squdgy creek,

Where the silence ‘ung that ‘eavy you was ‘arf afraid to speak!

On the road to Mandalay…

Rudyard Kipling: A Road to Mandalay (from his Barrack-Room Ballads and Other Verses, 1892)

Alan Gouk last exhibited at Hampstead School of Art in 2014: a series of gouache and acrylic on paper paintings marked by an overt fluidity of handling. Soups of primary and secondary colours were brushed, pushed and dragged into some of Gouk’s signature configurations: vertical gestures often animated with curves and leaning diagonals, set against supportive or disruptive horizontals. Working with this sort of liquidity and with this palette forces a painter to deal with brown; primaries end up there when all mixed – sometimes fatally, other times splendidly. This is the risk run and painting in this way is akin to driving on a cliff road – add speed into the equation and it can be quite a ride.

Hampstead School of Art has since moved into a stylish new bespoke building designed by architects Allies and Morrison and celebrates its 70th year. The modest café space providing the gallery walls. As a patron of this establishment, Gouk has reciprocated by moving his painting on too. After the recce of those gouaches, we can see the evidence of a more flowing “in the moment” attack. There were a couple of smaller works on show, but the main protagonists were five large, quite sumptuous paintings in newly adopted acrylics instead of the usual oil paint. Gouk coyly suggested the economy of acrylic was a deciding factor. (Having just purchased a post-Brexit order of acrylics at pre-Brexit prices before they go up 15% this month and finding myself eyeing up more and more lonely post offices in secluded locations, I am not entirely persuaded by that reasoning.) Acrylic flows over larger areas and there are a lot more surface variations that can be employed when compared to oil, especially with the addition of an ever-bewildering variety of facture-determining mediums.

These paintings have a real fizz, bang, wallop quality about them that at first sight stops you in your tracks. Painters paint and trek about visiting exhibitions of others – sometimes out of interest, at other times… courtesy (come on, you’ve all done it!). Gouk is one of only a handful of contemporary painters whose work I would go out of my way to see. Thankfully on this occasion it was an easy drive. You have to see these paintings in the flesh though to really feel their colour in relation to their size and indeed to your own body’s proportions. Screens nullify both facture and scale and I would urge the editor to post an image or two with a figure in the scene and perhaps even a close up to address this, even in a cursory way. [Ed’s note – here’s one…] 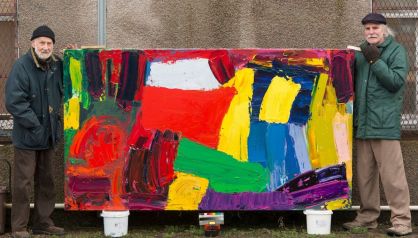 It is worth exploring how the paintings are made, as the tools of the job are brushes and cardboard (apparently in this instance the actual boxes that the brushes came packaged in – that’s a new twist on the recycling logo!). We can trace the use of each of these two applicators: the brush daubs and sweeps colour into rough bands in a very forthright and accumulative way; spreading the colour and working it into ordered areas until an amount of colour arrived at “feels right.” The box is used to drag colour through other colour – wet into wet. Indeed the paintings retain an alla-prima freshness of execution. You can see that there have been several or numerous “sessions”, but the evidence of one colour sitting on top of another from a different session is not as strongly felt as the amount of “in one hit” painting. It looks like a lot of the painting has been put down, then a whole new painting or at least a significant part of one is laid over the top (such is the bravery of “Gouka Din”). 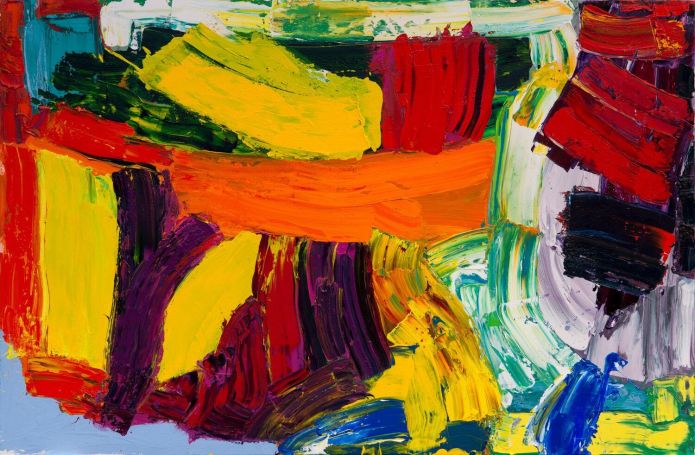 When a wet colour is dragged into another wet colour, the stakes are high – unforeseen outcomes are a gainsaid (of all ambitious painting for that matter). In this regard Gouk’s hands are a little tied. Use a complement and the cliff’s edge awaits, so a gamut of analogous colours are used instead. Greens drag through yellows and vice-versa, creating limes, reds through purples and purples through magentas. Blue is often bonded with white, and white is used to kick areas into a bristling effervescence. The paintings are stacked with these heady effects. Reds smolder with an insouciant menace in shadowy plums or rusts. We are staring at colour used in molten ways. The gestures are deliberately confrontational, addressing us front on, like a troop of soldiers on leave; some stand cheek by jowl, others sprawl or lean as if drunk on sun and alcohol – burned by the heat of an exotic climate and bewildered by its alien treasures.

Actor Fred Proud can be seen on You Tube giving a remarkable reading of Kipling’s Road to Mandalay. This rendition re-awakened lines which had popped into Gouk’s head as he was working on a painting way back in 1986, which in turn sparked an interest to revisit some paintings, in his view, which were unresolved. This information conjuring up a thematic aroma to the proceedings, with titles referencing the poem throughout. Make no mistake though, there is no illustrative or figurative link with poem or place evident. Yet the qualities of these works, their other worldliness and their pictorial ambition for an intense, pressing hedonistic colour space, positively revels with such an association. Nostalgia can swagger every bit as much as nihilism, so it is therefore important not to drift into the reveries of distant places like an off duty squaddie. Stand up straight laddie, there are paintings to be made! Thankfully Gouk doesn’t yield to the temptations of allusion – temptations so evidently given in to by so many high(er) profile painters.

The unforgettable example on show is “Mandalaysian Orchid” – by general consensus the belle of the ball –  “Supi-yaw-lat”. Like the others on show there is a sweaty, tropical temperature evident in the colour juxtapositions. The whole thing would burn out such is the acidity of the dark to light tonal shifts, if it wasn’t for the welcome cooling of a buttery lilac centre stage and a backhand flicked blue cuffed off to swim upwards and shunt into the welcoming corner of anthraquinone and dioxazine. A wonderfully applied pink at the top leaves a glimpse of an ice-cream roughneck ancestor to complete the dousing job. Like all the paintings on show, the regularity of vertical and horizontal holds sway, but, as in all of them, there is a simmering disquiet in the relationship of these forces, which adds a frisson to the work. To the left, we see a curmudgeonly cadmium lurch into the scene, propped up by a spindly streaky green that doesn’t quite stop the red from laying a finger on a friendly orange  – a nudging plea to be allowed into the party.

Although this is the stand out painting, I want to make a play for something that is going on in another. “Mephistopheles (Mandalay No15)” has a lot more awkwardness about it. Indeed it doesn’t quite hang together. There is an uneasy cappuccino brown which hooks into a deep phthalo green and streaky grey creating a sort of hole in the gut of the painting. Although this coffee looks out of place amidst the bacchanalian antics of the other colours, it does attempt a sobering moment. Also the whole right hand side has a fluttery invention in the way that the colour sits on or under a neighbour and cascades up to the top. I couldn’t take my eyes of the deep vat orange which straddles a dragged whitened purple and grey, especially as the edge is the original stained lilac showing its canvas weave in an airy release of space at the corner. There is something telling happening in these colours and I would like to see more of it. Would it perhaps be prudent to bring these softer earths and muted hues into the spotlight more to give the big guns more room to breathe – perhaps even by throttling back on the dragging box technique? The whole painting has an unpredictability that suggests it will repay on repeated visits with its secrets remaining intact for some time yet.

The paintings are worked on the stretcher from all sides and at some point an orientation presents itself. The ensuing gravity is then honed to an equilibrium. They sometimes have a “base level” of colour and sit up off that, getting to the top, which frequently has darker colours lurking about, either overtly or covertly enclosing and compressing the spaces. Coloured gestures and patches spread, squeeze or accelerate and often bump into one another in uneasy and at times claustrophobic ways. It is the saturation of colour that often rebuts any ungainliness, though not always; one or two passages had a dry stone wall build-ness which could have been lifted with more subtle transitions of hue, and some passages did lapse into tenebrous depths. The essentially frontal configurations shut down on any illusory devices. Illusions happen with colour, so why force them? Gouk prefers to maintain his focus on the primacy of immediate colour responses; put it on and see where it goes, what happens next will be something to deal with in due course, rather than worry about beforehand. I was trying to figure out a lineage here and although Hofmann and Heron, Motherwell even, could be cited, I am not convinced that any of them is a true ancestor. I’m sure that certain vernacular qualities raise their head from time to time which do connect Gouk with these three, but I would prefer to go back to Matisse’s “Moroccans” – a right bugger of a painting with a hard-wrought resolution that Matisse won his spurs on. It does no twisting and turning to present its mordant logic to us, rather it hits us head on – directly, unrelentingly; large – at first glance – cumbersome passages of paint gather their momentum and end up reaching an uneasy victory of pictorial unity. Each area of the painting is architecturally different to another. This is something that I see in Gouk’s painting – a declarative and specific construction of part to part relationships that neither exist as a process nor as a compositional device, though “Theebaw’s Queen” flirted with one. I think it boils down to an ‘honesty’ in the approach.

Gouk eschews any understated handling in favour of the power hit and there is no “knowing” device used to corral any reading of a fictive illusory space. This is a strength of the work; however, sometimes a little more sensitive variety of handling in the facture with some concessions to earths and more nuanced tertiaries in the palette would enhance their emotional reach even further. Then again I could equally well see him go the other way and make those high key chromatics career off each other in ever more explosively abrupt ways. The prize of such choices has to be earned by the hard yards in the studio. Which brings me to my final point: the directness and forthrightness of colour could appear to some as an obvious, even matter of fact thing to do; just get the big colours out of the tub, wing them around and hey presto another blockbuster abstract painting is born. It sounds simple doesn’t it? It’s not! Painting such as this takes a massive amount of dedication to one’s art. Not enough is made of this fact. Abstract painting with this ambition and clarity of purpose does not come easily.

“An there ain’t no ‘busses runnin’ from the Bank to Mandalay”… (though the 113 runs from Edgware Road and stops round the corner – go see.)