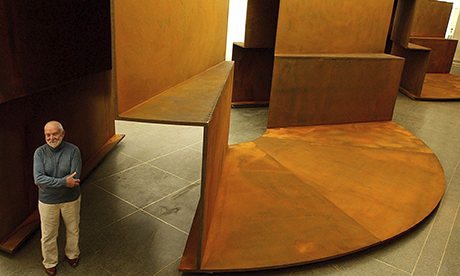 Caro with his sculpture “Millbank Steps”, 2004

Surveying the numerous analyses in abstractcritical and Abcrit, it is evident that one subject has occupied the attention of many contributors: that of defining the meaning(s) of the word ‘abstract’. From technical definitions: ‘non objective’; ‘non figurative’; ‘non representational’; ’concrete’ etc., etc. to the more abstruse renderings defining the ‘break with traditional norms of painting ’; or rendering traditional material into non mimetic ‘form’, or Picasso’s projection of collage into three dimensions to create a new medium for sculpture, ‘construction’.

The term has also been widely interpreted to signify a new art form, one that eliminates mimetic illusion in favour of representing nothing but itself. Others argue that there is no such thing as representing ‘nothing’; everything must ‘represent’ something; every blob, every mark, is capable of being ‘something’ else.  ‘Abstraction’ is seen as being in a continuum from the past (of painting), through periodic changes of ‘making’ that create a new pictorial vision of the world, albeit by illusion. It can also be seen as  a complete break with the forms of the past in favour of new norms (usually largely derived from geometry), which are seen as representing a totally ‘abstract’ new ‘reality’, its subject not being derived from nature, but being ‘scientific’ in its new ‘truth’ (ignoring that science itself deals with ‘nature’). Yet another interpretation is seen as being the hallmark of a ‘modern’ art, an art that is of our time and synchronises with other major changes in society, living styles, engineering and technical development, all the signals that suggest that man has evolved, improved and developed in time.

Whichever semantic definition one prefers, abstraction as used to signify a new Art Form (of the 20th C.), which, though building on the foundations of the ‘old art’ (via the 19th C.), is perceived as radically different in its vision (pace all the arguments about abstract ‘content’).  Much discussion, however, has been about the ‘stepping stones’ of the 19th C.; in which abstraction is viewed as having always been integral to making art (largely painting) and which in its ‘modern’ (mid 19th C. on) developments, though representational, rejected the old formulae of three dimensional illusion, spatial perspective depth etc. to evolve totally new ways of looking, seeing and describing.

END_OF_DOCUMENT_TOKEN_TO_BE_REPLACED

The following is taken from a recent exchange of emails.

“….The quality of a work of art inheres in its “content”, and vice versa. Quality is “content”, you know that a work of art has content because of its effect. The more direct denotation of effect is “quality”. Why bother to say that a Velasquez has “more content” than Salvador Rosa when you can say more simply and with direct reference to the experience you are talking about, that the Velasquez is “better” than the Salvador Rosa? You cannot say anything truly relevant about the content of either picture, but you can be specific, and relevant about the difference in their effect on you. “Effect” like “Quality” is “content”, and the closer reference to actual experience of the first two terms makes “content “virtually useless for criticism………indulge in that kind of talk about “content” myself. If I do not do so any longer is because it came to me, dismayingly, some years ago that I could always assert the opposite of whatever it was I did say about “content” and not get found out; that I could say almost anything I pleased about “content” and sound plausible……”

Robin Greenwood: Thanks Tim. We all define these things a bit differently, don’t we, but I’ve found the idea of “abstract content” quite useful recently. Time will tell if I’ve got it right or wrong.

Tim Scott: I’m interested. Are you saying that “abstract content” is different to any other sort of content? (Clem says it’s all the same but should be called “quality”; he doesn’t use the word “value”, as in value judgement.) Another point he doesn’t touch on is whether there is any difference between “sculpture content” and “painting content” in terms of definition.