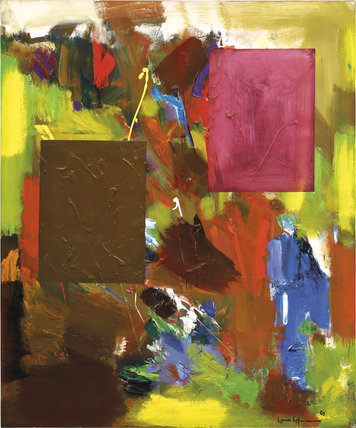 Not drunk, but pretty high. But not until the very last room of the show, having been bored and annoyed, as usual, by the uninteresting posturings of Still, Rothko and especially Newman; and somewhat underwhelmed by David Anfam’s selection of de Kooning and Pollock. Finally, here was a so-called Abstract Expressionist painting, “In Sombre Ecstasy” by (to quote Matt Dennis from his comment on the Motherwell post) “the criminally under-represented” Hans Hofmann (1965, from the Audrey and David Mirvish collection, Toronto) that was not only properly abstract, but also truly expressive. I think this is a really good painting, possible a great one. I think it might hold its own against a decent Cezanne or Matisse; I’d love to see it in the company of a good Tintoretto or Constable. I’d love to see it in good company, full stop.

I’ve seen it before, at the Hofmann show that Hoyland put together at Tate in 1988. I don’t recall being quite so taken with it then, but there was a lot to digest in that show – the whole oeuvre of Hofmann’s later works, and it was all new to me.

It’s the best Hofmann that I can now recall seeing, which must also make it one of the best abstract paintings I’ve seen. In my opinion it is a very integrated work, including the big rectangles, my frequent stumbling blocks (pun intended) with Hofmann, especially when they take over most or all of the painting. In this instance they are much more fully integrated with all of the other content – the powerful but unspecified movements which course both diagonally across, and back and forth through depth. The other general factor in this particular painting’s favour, compared with much other abstract painting, including far too many Hofmanns, is its completeness; it has been carried right through to a resolution, rather than left off at an early stage in a half-painted, half-bare-canvas state. Hofmanns are on the whole all the better for being fully worked up, and this one certainly is.