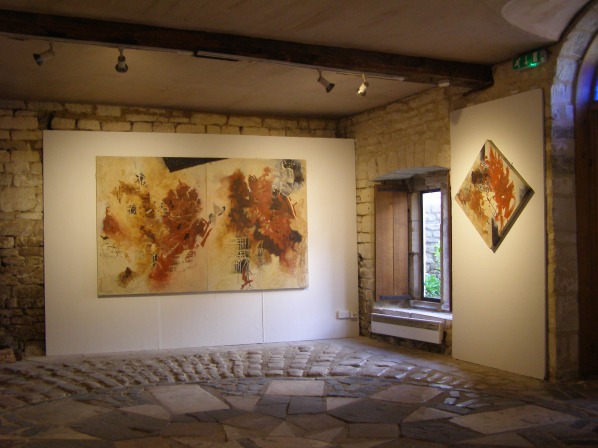 Ruskin Mill, situated in a wooded Cotswold valley beside a lake, is the perfect setting for Nick Moore’s latest exhibition, ‘MATERIALSHIFT’. The old stone interior, with a soot laden wall scorched by a primitive open fire, reflects the elemental quality of the earthy pigments Nick uses in his paintings/collages. These works stem from a series of paintings Nick rediscovered during a recent studio move. They were discarded canvasses and different from his earlier series, ‘Dark Intervals’ (which had focused on black and burnt umber as key components), in the sense that they had a revised colour palette of buff, Payne’s grey, red ochre and burnt umber. In this new series Nick has integrated added material into the fabric of the paintings and heightened the textural experience. He has used sacking, old roofing felt, PVA mixed with either sawdust or sand, crushed charcoal and ashes mixed with acrylic colour and ink, together with various moulded cardboard remnants that have been distorted and flattened to create areas of animated surface.

These paintings contain the duality of chance and choice, what in music John Cage talked about as ‘considered improvisation’. Nick has allowed us to witness a sensual engagement with material and is inspired by painters such as Burri, Tapies, Millares and Kiefer whom he refers to as ‘matter’ painters. 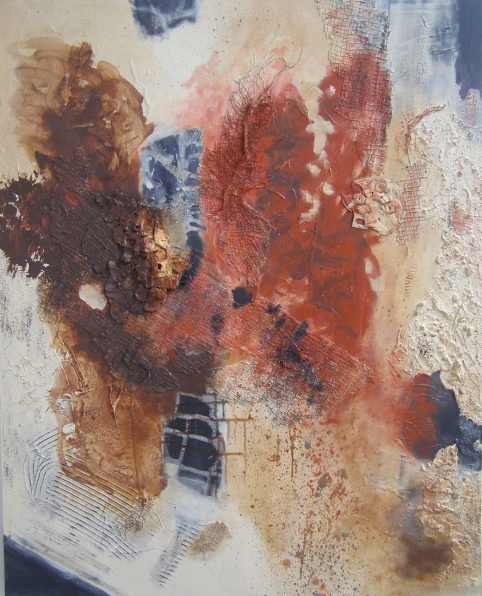 There are forces in these works that complement and oppose, Nick uses edges to draw the eye away from the centre, evident in ‘Certain’ and ‘Expansive’, and often creates two opposing experiences within the same painting. In ‘Jumpy’ for example the elemental, explosive, volcanic eruption of buff, Payne’s grey and red ochre on the left side is tempered by the diagonals leading to an area of architectural constructs. 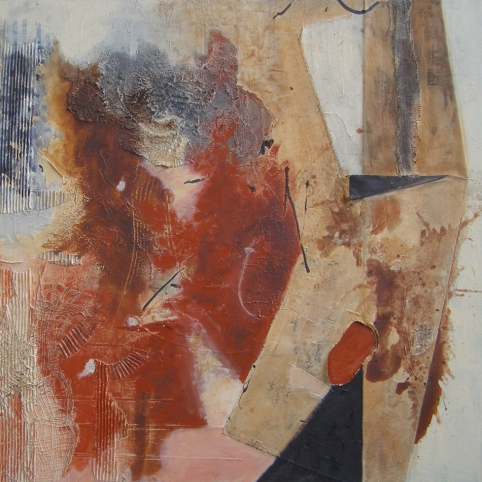 Similarly in ‘Cryptic’ the right hand side is occupied by graphic shapes and structures, triangle wedges and a rectangular like sheet of canvas stuck on with a raised oval hole, giving it a cubist collage feel, whereas the left is all  weaving, shifting chaos. In ‘Breathless’, hung off square on the diagonal, there is a central broken band delineating two halves of the composition, with an explosion of scrim to the left and gestural painting to the right connected by horizontal marks taking the eye from one side to the other.

Nick’s work expresses opposing sensations throughout, dark/light, smooth/rough, fluid/caked, splattered/blended, chaos/structure, milky/sooty, painted/collaged, frontal/aerial, size/scale. The exhibition can be taken in as a coherent whole as you walk into the space, largely due to the reduced, shared colour throughout, but the works reveal their individuality and invite close scrutiny to experience the complex layering and well handled integration of matter into the surface.

There are areas of sensitive watery milkiness webbing their way across compacted dry Payne’s grey in contrast to inky spills and stripy drips over ashen chalky passages. There are craggy raised surfaces very evident in ‘Expansive’, ‘Pungent’ and ‘Discursive’, but also painted textures echoing the corrugated card and weave of the sacking used to activate the surface.

During his talk Nick was explaining that after the ‘DarkLight’ series he had a period of improvising with buff, terracotta and black clay, responding to a need to work more ‘tactilely’, more directly with ‘stuff’. The objects he created became a kind of bridge between the two series and led to the expanding materiality of the new body of work in this exhibition.

Each series of paintings contains a seed of an idea for the next, something discovered to build on and develop, a continuous shifting of material. 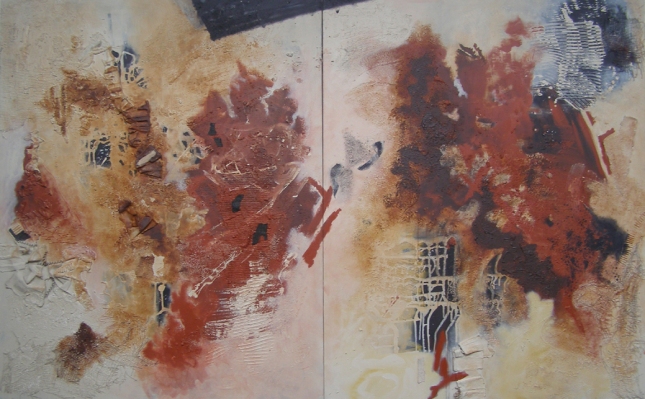 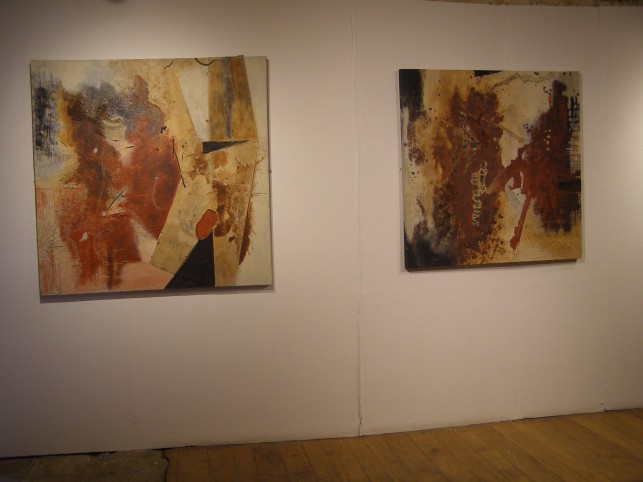