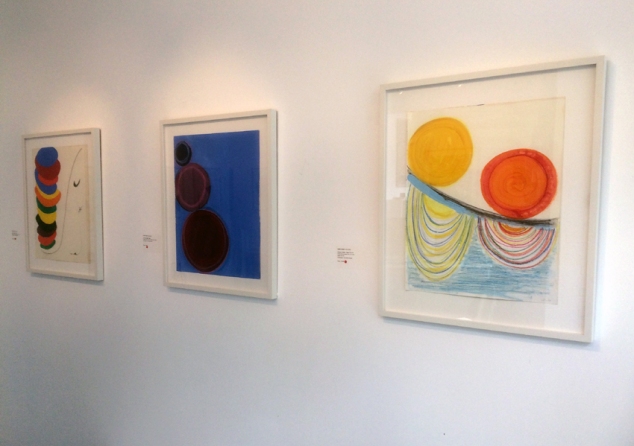 Gaining access to an artist’s sketchbook can be a rare opportunity. Even the artists you know personally might be reluctant to let you leaf through their, sometimes, intimate visual journals. Belgrave St Ives (with the Terry Frost Estate) have gone a stage further than merely displaying a book in a vitrine for this exhibition. A large format sketchbook (46.5 x 37.5 cm) of Frost’s has been dismantled and 30 out of 50 or so pages have been surface mounted and framed. The workbook covers much of the decade from the 1970s to 1981 and followers of Frost’s career will recognise several of the artist’s favourite subjects, for example ‘Suspended Forms’, the ‘Sun and Moon’ theme, and the ‘Lorca’ series.

Seeing the main body of this work (paintings and collages) almost simultaneously in the gallery allows a general sweep of all of the images, as well as more concentrated looking at individual pages. Some degree of comparison is also possible and the curators have carefully placed images alongside each other that have some sequential or common features that link them together thematically. In a few instances, double page spreads from the book had also been kept intact and the most bold and impressive of these were pages 104 and 105, a painted maquette for the subsequent woodcut, ‘Two Loves for Tredavoe’ (1999). 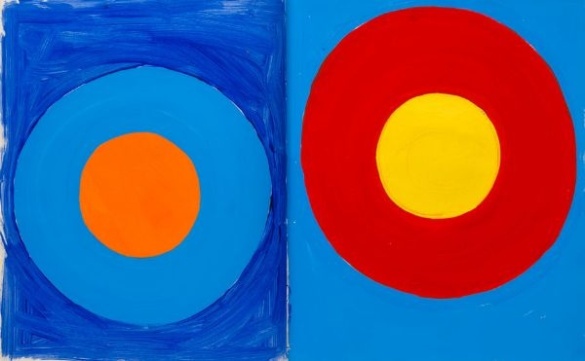 As a book of visual ideas, the notion of thoughts as ideas or ‘concepts’ is especially interesting in the current ‘conceptual’ era (when was art not conceptual?). The title of the show might serve as a useful didactic device – for if we thought that ideas were exclusively spoken or written or even separate from the visual – Frost’s workbook reinforces the phenomenon of idea as form, which is realised through and from seeing. In fact there are very few words in the original book (now, there is no original of course – except for the digital version on issuu) and where they appear they are essentially titles or themes.

We all know the contention that subjects or ideas in the visual arts cannot (or need not) always be expressed as words (“If you could say it in words, there would be no reason to paint.” – Edward Hopper); and that abstraction, most especially, offers a range of language-type-formulations that travel way beyond the mimetic or the story-telling narrative. (See Alan Gouk’s persuasive essay, ‘The Language of Painting?’ in Abstract Critical for a fuller discussion.) In this case, the visual ideas instigated by Frost accompanied the gestation and realisation of his many paintings and prints. The majority of the works selected for display are satisfactorily complete in themselves; and may or may not serve as studies, or small echoes, of final works. 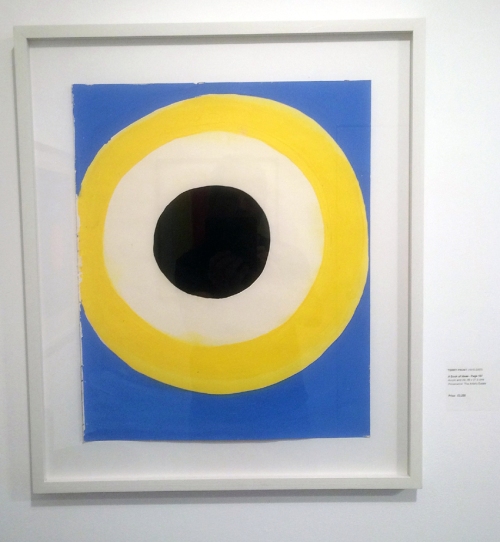 With a Terry Frost show, a visitor probably knows what to expect: bold decorative forms and flat, unadulterated colours, many of which will reappear over time are typical. Indebted to the legacy of Matisse as much as the more contemporaneous New York School, Frost’s abstraction is taken to extremes of simplicity, incorporating pictorial flatness, curvaceous shapeliness and visual rhythms at their simplest but most effective. But his was an abstraction relating to the world of lived and perceived experience and reduced (or expanded) to essential visual expression. In the broader narrative context, from a personal, biographical background of relative economic poverty in the 1920s and ‘30s, and life as a POW; a rebirth of sorts via Camberwell School of Art – and, surely, also raising a family, whilst professionally developing his talent in the 1950s and ‘60s – enabled Frost’s art to embody a celebration of life.  This joie de vivre was an expression of his personal freedom – realised through his art. Colour-shape (to reference his contemporary, Patrick Heron) and a mastery of visual balance in the simplest terms were the mainstays of Frost’s visual agenda. 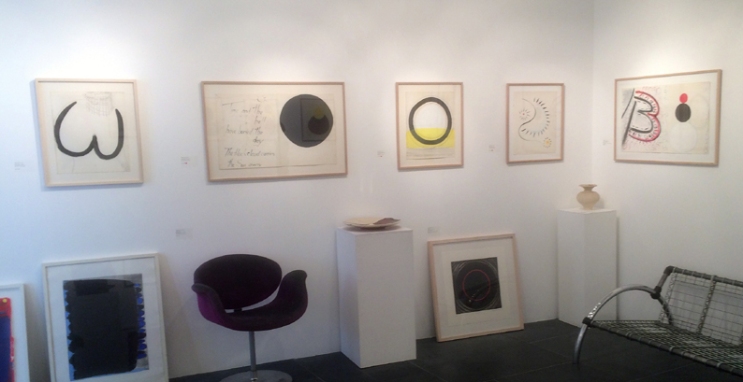 Though deceptively effortless, an apparent triteness can sometimes be misapplied to Frost’s work. To arrive with preconceived notions of overt external context (notwithstanding the contexts of personality and culture), or to look for ideas to decipher, would be to misread and to misjudge and might be best deflected by Frost’s well known phrase: “If you know before you look, you can’t see for knowing.” He seems to disarm the intellectual ingestion of the visual, so that the purely visual remains paramount. This is quite an achievement. 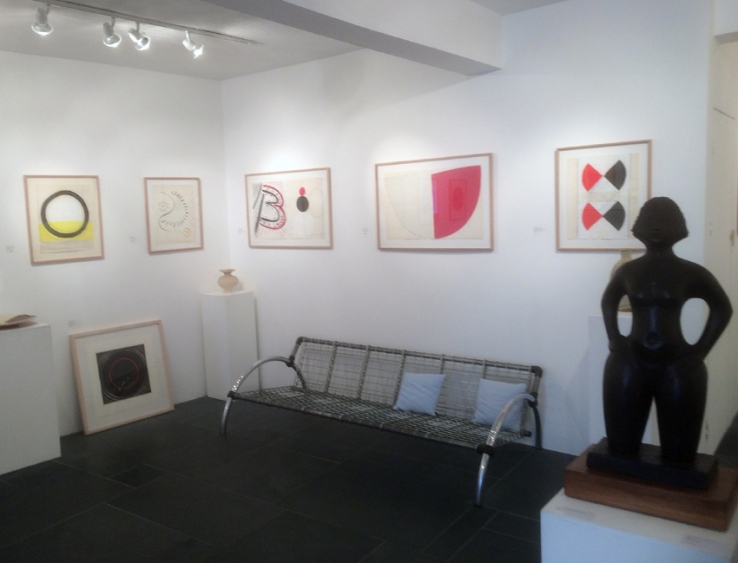 An interesting, but not universally applicable notion in John Bunker’s recent article on AbCrit about Richard Smith’s work of the same post-war era that Frost also excelled in might be relevant to consider at this point:

“The 60’s and 70’s were awash with new colour concoctions chemically formulated to stimulate, seduce, shock and affect the mind and body of the hapless fickle children of the first world in the late 20th century. The tension between angst ridden restraint and the urgent desire to experiment in visual excess in all directions is palpable in this show…”

But I dare anyone to find angst in Frost’s oeuvre. Visual excess is not evident in this workbook either. Rather like Matisse: Frost’s work is celebratory and far from fickle. Frost never vacillates – he’s annoyingly certain. 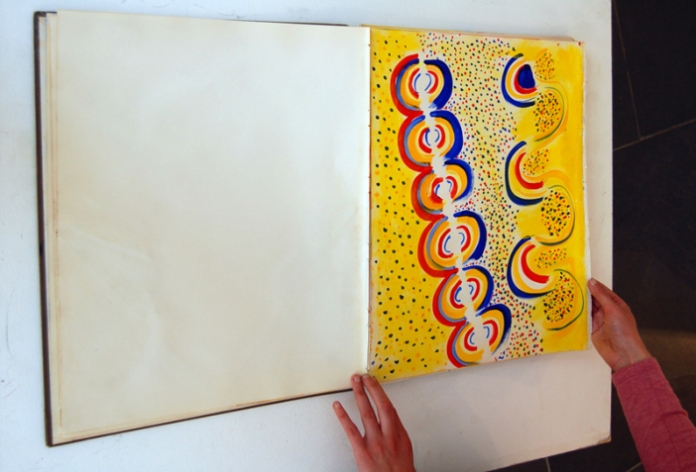 So, ‘A Book of Ideas’ offered a rare opportunity to see behind the scenes into a mini studio space of sorts. The humble workbook (a development of the sketchbook) wherein the artist can doodle, play and ruminate visually as he wishes, without fear of comment from any audience deepens an understanding of Frost’s work. It is unreservedly optimistic, and at ease with the world. I doubt he doubted. 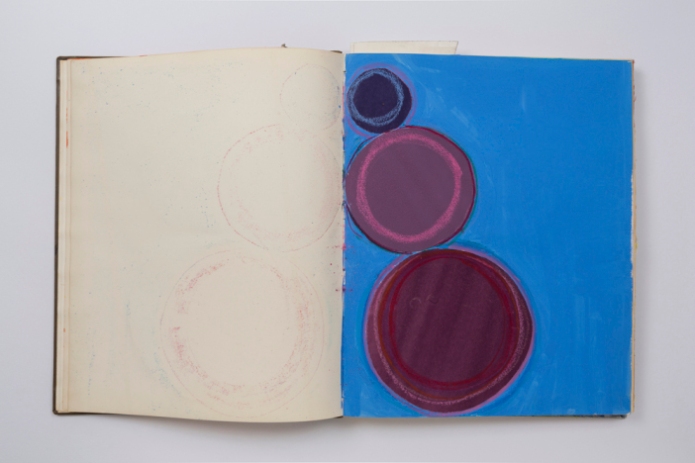 And finally, the ‘elephant in the room’: Is it contentious to have dismantled such a document? Was this no more than a reasonable commercial decision? It may feel wrong to cut a document up, most especially one that an audience was not expected to see. But left intact it’s essentially a document for scholars alone – or the occasional presentation in a museum showcase – viewed just one page at a time. With the virtual reproduction available on-line the workbook is preserved. From a purist point-of-view the book should have remained intact as the various images are now recontextualised in a frame and presented on the wall – but fragmented will now be looked at more frequently, even if in the privacy of a collector’s home. 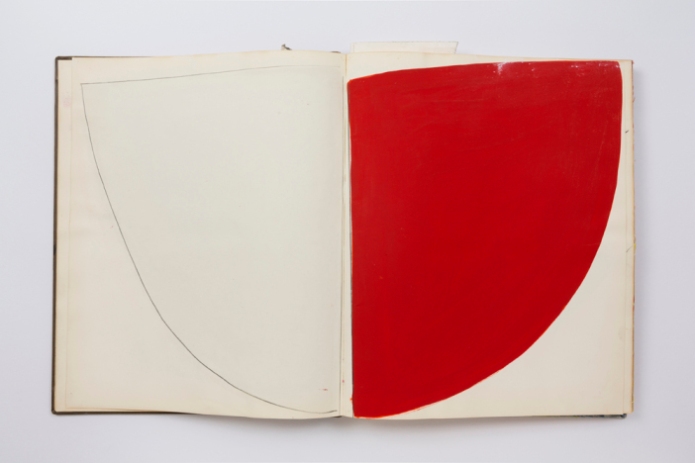