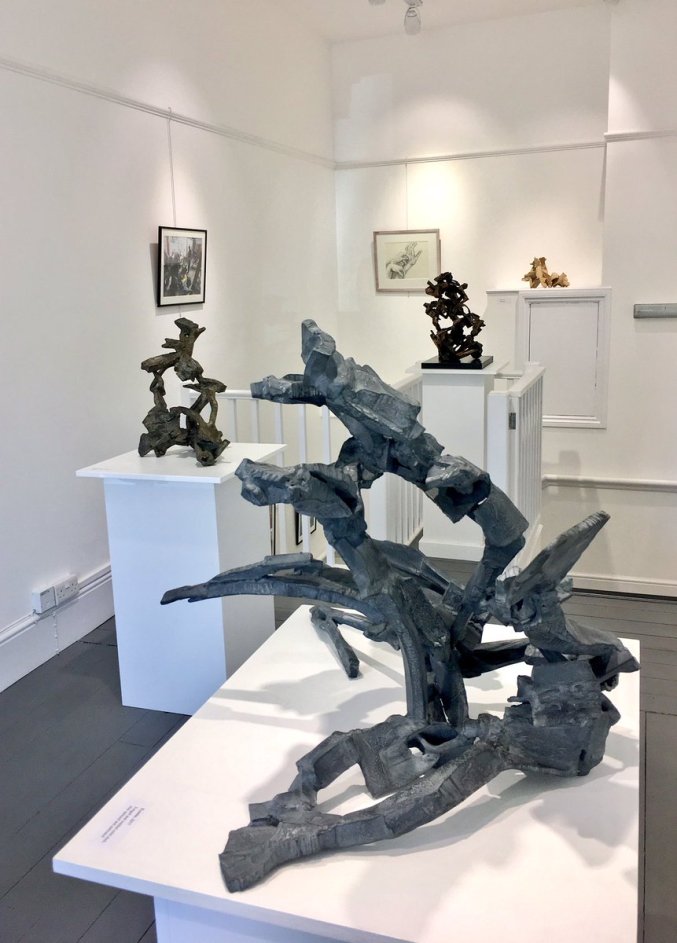 Installation of Katherine Gili show at Felix and Spear, “Kyanite” in the foreground

Katherine Gili: Discovered in the Making is at Felix and Spear, Ealing, 5 May -2 June 2018

Five years ago I drafted an article for abstractcritical focussing on the works by Anthony Caro and Katherine Gili in the 2013 RA Summer Exhibition, neither of which I liked. The Gili, a sculpture of complicated forged parts that circulated a central void, with big alien feet and a prop to one side to steady it all, was called “Ripoll”. I had previously shown this work in Poussin Gallery in 2011, though I think Gili amended it slightly before it got to the RA, where it won the Jack Goldhill Award for Sculpture. In the essay I described it as having a banal configuration, to which Katherine took great exception (though I stand by it) and our previously close relations were, and remain, soured, despite my withdrawing the essay prior to publication.

Why bring this up now? In Robert Persey’s interesting catalogue essay for Katherine’s new show at Felix and Spear, which has work far superior to “Ripoll”, and which I will address shortly, he writes:

“Katherine’s ambition for her sculpture is predicated on a search for full three dimensionality, beyond the creation of a simple shape or form, beyond rotundity or intimidating spread across space.”

These sentiments I agree with completely, and they are obviously incompatible with banal configurations, and possibly with any configurations at all, though that’s up for discussion. Does the new sculpture match these ambitions? When I rewrote the said essay and expunged all reference to “Ripoll”, and indeed Gili, I concentrated on a critique of Caro. The revised version (published here: https://abstractcritical.com/article/anthony-caro-at-gagosian-some-problems-of-sculpture/index.html) started thus:

“Three-dimensionality is the elephant in the room marked “abstract” in the house of sculpture. It’s a difficult subject for discussion, and a difficult condition for sculptors to address. So why bother with it? Caro doesn’t worry; sometimes he uses it sparingly, sometimes not at all. I think it is the biggest issue in sculpture right now… because in directly addressing it the abstract artist is forced to abandon the narrow and dated (and admittedly often languidly beautiful) two-dimensional planar aesthetics of high modernism, whilst simultaneously rejecting the pratfalls of post-modernist subjective clap-trap. It provides potential and impetus for a new and true way forward. So important do I regard this issue that I frankly think there is no alternative other than to directly confront it – a notion for which I may well be considered narrow-minded. Yet, could we even begin to crack open this particular nut, I’m disposed to think that abstract art would broaden out considerably from its currently unambitious and unoriginal ruts and furrows. Almost anything that one can do that addresses this issue seems to point inexorably toward exciting uncharted waters.”

END_OF_DOCUMENT_TOKEN_TO_BE_REPLACED 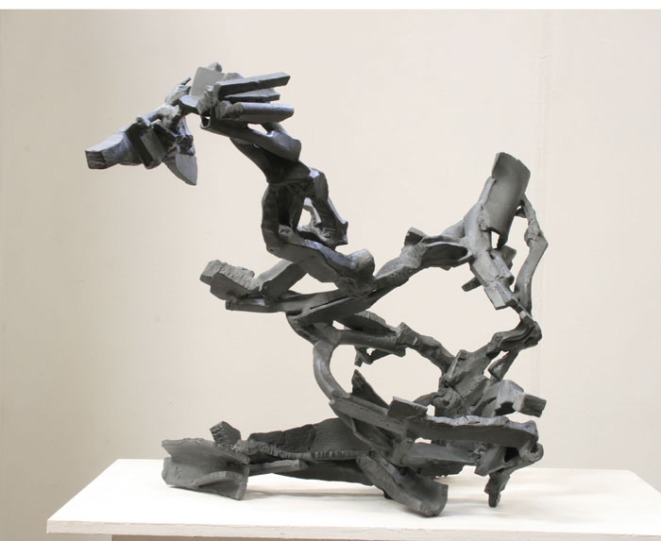 The sculptural power of Leonide, 1981-82, as it thrusts into space, to go no further back in Gili’s oeuvre, is clear affirmation that sculpture whose aim is to engage one immediately in a spatial way rather than having a predominant viewing point, does not need to do so equally from all points on the compass. Considered as an analogue for a structure, (with its figurative connotations in abeyance for the moment) its “stance” is forthright and unambiguous. It has remarkable physical presence from wherever it is viewed. It IS – it exists as an object in space, articulate and articulated, self-assertive and self-justifying (though that’s not all that it is). Each element is clearly defined in character and in its structural role. And it seems to say something about Gili herself, an enduring strength of character and artistic identity, proving that the unconscious reveals itself more through arduous realisation and reflection, than through perceptual self-trickery or doodling. It makes Giacometti for instance look very feeble indeed.

The fact that its structure is also a representation, if at some remove, of a body in movement allows one to accept without demur that it is anchored to a base and cantilevered from there.