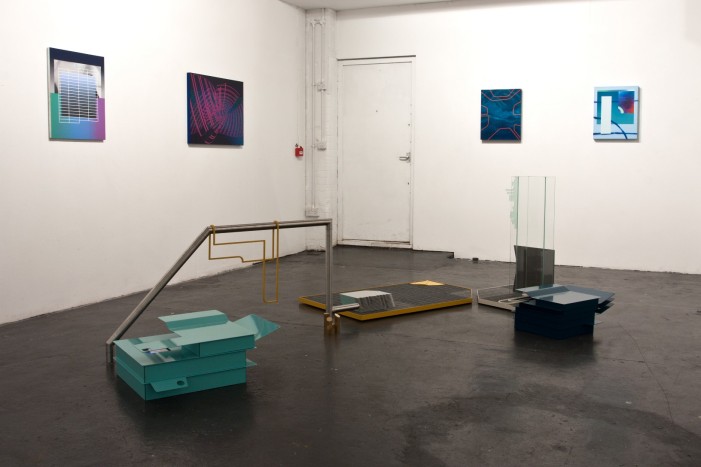 Some Thoughts on Sea of Data Just Finished at Unit 3 London.

Most abstract artists I know use a digital camera as an archiving tool. Then they jump between social media platforms and websites to upload and promote their decidedly ‘analogue’ endeavours in the fine arts. Some may make a wink or a nod to the digital realm in a title or a blurry right angle or hard edged Day-Glo vertical in an artwork. But what if one starts to put this fast developing epoch defining technology at the very core of the creative process? It is one thing to mimic the look of the screen etc. It is quite another to make the computer the generator of imagery, of colour, of line- and all the other qualities we associate with the realm of abstract ‘painting’.

Ever since the computer’s earliest developments our cultural landscape has been littered with imagery to do with them. In fact there are a welter of cliches that permeate mass culture and high art concerning circuit boards, control panels, surveillance tech and the supposedly numbing effects of our image saturated consumer culture. Of course, recently, we have seen artists work that involves relational aspects of data collection, performative interventions using Twitter or ordering loads of ‘stuff’ on Amazon and dumping it in high-end gallery spaces. But in the idiom of abstract painting and sculpture, what impact could the encroaching digital realm of experience be having upon the production of work and the culture that surrounds that production? 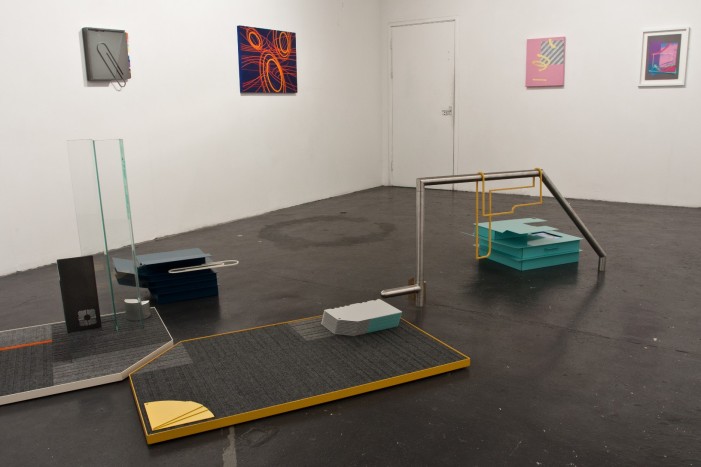 These are some the questions that come to mind while visiting Sea of Data curated by Simon Pike and showing work by himself Charley Peters and Ian Monroe at Unit 3 in Poplar. It seems that the two powerful art historical drivers at work in this show are systems art and the cooler aspects of pop. Of course there is the original complex nexus of forms of abstract art that have interacted with modernity in general and the utopian thrust behind the rise of the first machine age specifically. But our times are decidedly post industrial, post truth and still pretty much post modern. Systems art, constructivist art, under the rubric of geometric abstraction, have cast long shadows across our new media world view. This whole geometric edifice has seen a real resurgence in interest of late but I believe we are dealing with a new  digital image producing machine that Walter Benjamin could only dream of and for that reason, it is pop’s dalliance with reproductive techniques- either reproducing them in painterly form a la Lichtenstein or using technology linked to photography like screen printing or transferring imagery via solvents re Warhol/ Rauschenberg that feel more relevant here. 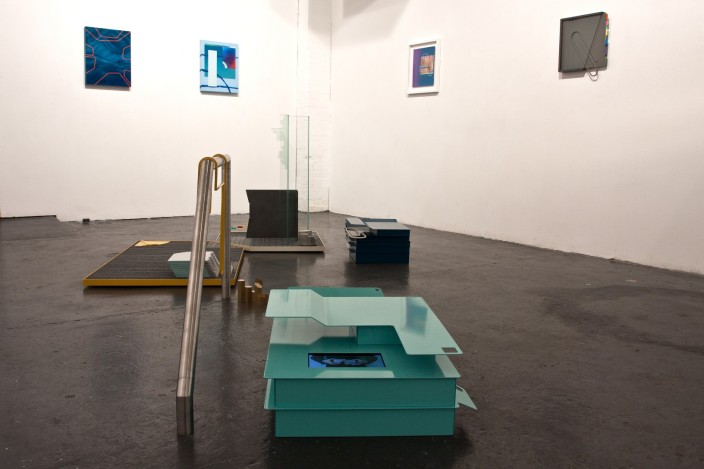 But having said that, even with screenprint and solvent transfers we are still aware of the inconsistencies, idiosyncrasies and accidents born of the human hand at work in repetition. It might be even more relevant to move things on  and look at some terminology from the 80’s like ‘simulacra’ for instance. Simulation infers the notion of a clone. It is not a copy that diminishes in quality as much as it is an equally perfect example of an original that can be endlessly reproduced in countless permutations ad infinitum until the very notion of the ‘original’ becomes meaningless. If we combine this idea with Michael Craig-Martin’s simplified inventory of deliriously rescaled and modified images of everyday objects, we may have some more clues as to the nature of Ian Monroe’s collections of sculptural components on show. They at once echo, in their, smart, easy going and machined finish, some of the elegant floor based ‘open’ painted steel sculpture of the 60’s. But at the same time they seem to have been compiled by random selections from the shelves of an upmarket online stationary warehouse. In fact all the  work here, in different ways, reference the screen based process of designing components. But Monroe suggests in the sculptural layout in the space, a sort of ongoing process of arrangement and refinement. Some of the components then go on to infer the ubiquitous furniture of office spaces and work stations that are built around the screen and facilitate the deep and unremitting engagement with it. Afloat within the arrangements are strangely outsized renditions of office equipment like the paper clip (a la Craig Martin) or the pen holder, the multi coloured tags of a filing system (very 20th century!) and of course, the ‘Sim Card’. 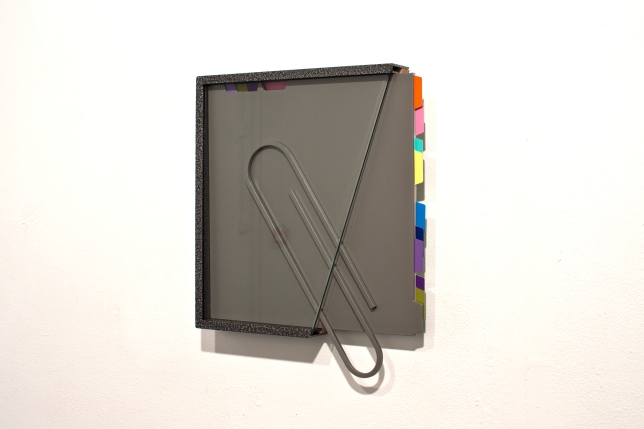 I think its fair to say that the work here in Sea of Data does not see abstraction and figuration as mutually exclusive categories. It gets more slippery when we start to talk about representations of abstractions. Maybe one has to ask why abstract approaches to painting seem particularly partial to invoking , flirting with, or in a way representing imagery from the screen? And if the screen is the main interest of the artists then why not make the work to be seen on one? Why transfer these representations of what we might associate with screen based imagery into ‘painting’ and ‘sculpture’? 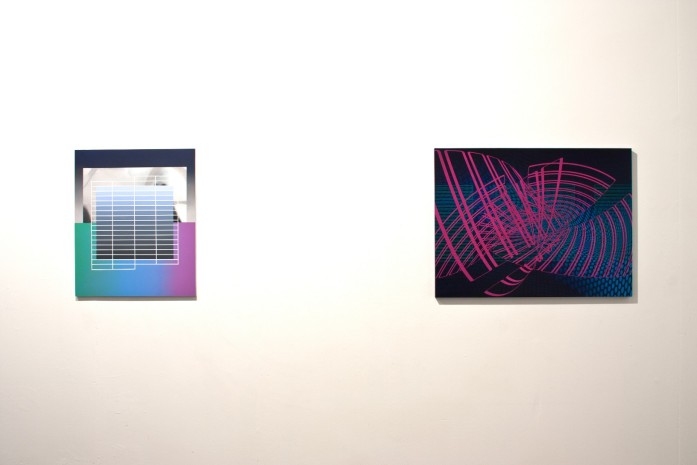 In terms of sculpture, to transform a screen based image into a ‘real thing’ in three dimensions still has a certain kind of primal magic about it just like the simple surrealist trick of turning the tiny and mundane into a marauding giant. The ‘thingness’ of the object- it’s reality as an object- takes the emphasis away from the issues of ‘representations’ and into the arena of uncanny physical presences- a process of alienation that has a long history in Modernism- and with the rise of these new reproductive technologies- has a particular new found aura right now. But I think it is quite different with painting. Modernist preoccupations with the hunting down of painting to a set of essential material properties, left a huge realm of visual opportunities writhing in its shadow. As a linguistic game of historical echoes, it is interesting to place the title of this show ‘Sea of Data’ against an influential American show from 1989 called ‘A Forest of Signs.’ One of the main premises of ‘A Forest of Signs’ was that the artists selected were the first generation to have ‘grown up’ with the day to day influence of television. But instead of photography and television being the harbingers of education and truth, the selected artists focused on these mediums as arch manipulators of information and emotion. Of course, now personal computers, Iphones and the high speed relaying and dissemination of digital images have taken this idea to a whole new level. We have moved on from dark and densely packed claustrophobic spaces of televisual signs and hardware to a sense of visual drifting on currents, eddies and waves of digital imagery and a much clearer fixation on the individual’s relationships with the screen- screens which are flat- screens which are mobile, wireless and super-connected, which can summon almost any kind of representation of any ‘thing’ from it’s unimaginably complex networks of data. But we will always have one eye open on what may lurk beneath these digital oceans. If we choose to dive deep what can this realm tell us about ourselves? Figuration has been constantly re-invigorated first by photography and now digital imagery of the body and beyond. But what about abstract art? It was artists like Halley, Goldstein and others from the Neo-Geo/Appropriation generation who forced abstract tendencies in art into new relationships with reality and with representations of that reality. 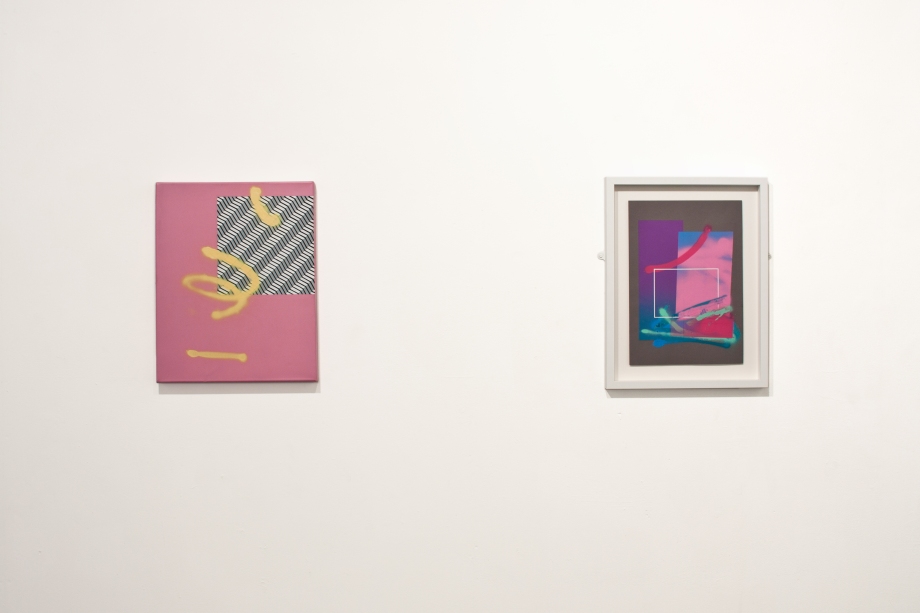 Can the realm of the digital medium, when it is brought to bear on abstract painting and its histories, create new messages? And if so, what might those messages be? Both ‘painter’s ‘ here  invoke the idea of floating or immersion, and deny the gravitational aspects of paint’s materiality but they achieve this effect in very different ways. Peters’ long term interests in the history of geometric abstraction is countered by a will to atomise it, to turn it into a realm of seductive images and layers. Some infer cage like structures that block out what might lay beneath. In “Aggregate_Locality”, 2017, we’re reminded of those pixelated blocks that hide a face or some other body part in some hard hitting documentary. This atomisation of the picture plane is achieved by the use of spray paint and one is strangely reminded of the pulsating pearlescent pigments of some of Olitski’s more extreme colourfield works. But Peters’ goes some way in undermining the Modernist assertion of the picture surface. Illusion and materiality are held in a kind of suspended animation. It is interesting to note that we associate the idea of algorithms with modern day search engines and data collection but algorithms have been around for thousands of years and inform many foundational geometric underpinnings of picture making. I’d be very interested to see how her work on more complex algorithmic configurations would function on a much larger, immersive scale. 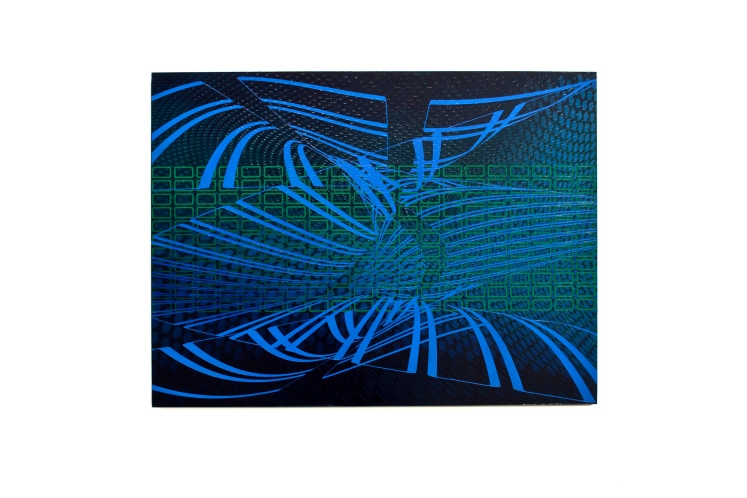 It is interesting that digital technology has produced such powerful manipulators of visual experience. The world of CGI, for example, has transformed the science fiction genre in film. Ever since its literary inception science fiction has become ever more entwined with science fact and modernity in general, with a particular penchant for apocalyptic narratives, on the whole, being the order of the day. And it is Pike’s work that brings a darker edginess to the show. Influenced by the design aspects of the latest breed of sc-fi block busters as well as the sinuous line of the early modernism of Art Nouveau , Pike uses intricately cut stencils to layer imagery that are interpenetrated with gridded formats that relate explicitly to the construction of digital imagery on a screen. Where Peters’ dissolves her surfaces and breaks them up with bright but cool colour planes, Pike builds up complex webs of striated paint. They at once create a dense and tactile surface but with rhythmic high key colour sequences, caught in a decisive whiplash line, and alive with the seductive energy and glow of the screen. The results are both hypnotic and visceral.

Simon Pike’s curation has managed to articulate an original play of historical precedents. Young artists against new media and old mediums against new messages. Sleek and sophisticated, yes, but with huge potential for real and darker bite.